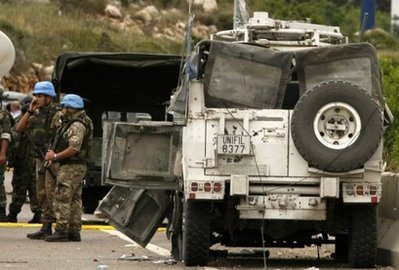 U.N. chief Ban Ki-moon on Friday condemned a bomb attack near the Lebanese southern city of Sidon that seriously injured two Italian peacekeepers, pledging to "bring the perpetrators to justice."

"I condemn the attack on the U.N. peacekeepers which happened today in Lebanon," Ban said in a statement. "It is all the more deplorable because today is the International Day of the United Nations Peacekeepers."

"The United Nations," he continued, "will work closely together with the Lebanese authorities to have a full and swift investigation on the attack to bring the perpetrators to justice."

Italian Defense Minister Ignazio La Russa condemned the attack, while Italian ambassador to Lebanon, Giuseppe Morabito, said “this cowardly terrorist attack calls for a global and strong condemnation from all political Lebanese forces who believe in peace, stability and democracy, and those who reject resorting to violence as a means of political struggle.”

The French foreign ministry condemned in a statement the attack and called on carrying out an investigation.

“We call on the Lebanese authorities to do all that it can to prosecute those held responsible for this crime,” the statement said.

In Washington, U.S. State Department spokesman Mark Toner condemned the bombing, adding that “we send our condolences to the attack’s victims.”

The U.S. called on the Lebanese state to “carry out a full investigation and do what it takes to bring the perpetrators to justice quickly.”

For his part, President Michel Suleiman condemned the bombing, noting that “this criminal act aims to harm security and stability in the country.”

Suleiman asked the authorities concerned to open a probe into the attack in order to unveil perpetrators and bring them to justice, after he was briefed by Army Commander General Jean Qahwaji on the available information.

“On behalf of the Lebanese government, I condemn in the strongest possible terms this terrorist act which not only targets the role of our friends in the world in protecting Lebanese sovereignty and providing elements of stability to our country, but also targets the safety of Lebanon and its people, particularly the safety of citizens in the south who have long suffered from the continued attacks on their land and security,” said Hariri in a statement.

“We hope that the UNIFIL will carry on with its mission in accordance with (U.N. Security Council) Resolution 1701, which the Lebanese government considers an essential basis to preserve Lebanon’s stability and spare the region any new violence,” Hariri added.

“Lebanon is fully committed to all the requirements of this resolution, and considers the attack on the Italian battalion an attack on Lebanon’s sovereignty,” Hariri went on to say, warning against “any attempts to use Lebanon as a new arena for sending messages against the international community and the UNIFIL in particular.”

Speaker Nabih Berri also issued a statement in which he called for “the highest degree of vigilance in order to unveil the perpetrators and slap the strictest penalties on them.”

In the meantime, Hizbullah described the attack as a “criminal assault”, stressing that “perpetrators should be exposed and punished.”

And Prime Minister-designate Najib Miqati denounced the attack during a phone conversation with U.N. Special Coordinator for Lebanon Michael Williams.

Miqati lauded “the efforts exerted by the U.N. to maintain security and stability in southern Lebanon.”

For its part, the Lebanese Forces condemned the bombing and called on the State to “shoulder its full responsibilities in taking all measures necessary to prevent the recurrence of such incidents, especially in the South.”

The LF noted that “UNSCR 1701 represents a guarantee for Lebanon’s stability … and for preventing the exploitation of the South once again by turning it into a ‘mailbox’ or an arena for settling regional accounts.”