Study: Asteroid Strike Did in the Dinosaurs 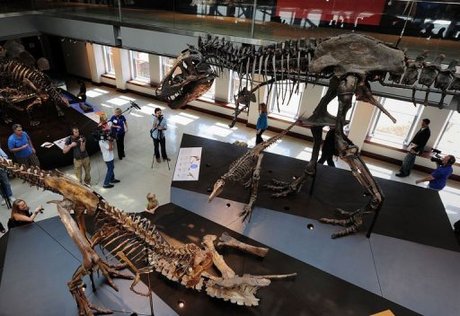 Scientists said they are a step closer to proving the death blow for dinosaurs 66 million years ago was a gigantic comet or asteroid that struck near Mexico.

Although a catastrophic impact has long been thought to be involved earlier work left doubts about just when the object, estimated at some six miles (10 kilometers) in diameter, struck in relation to when dinosaurs disappeared.

But in a study out on Thursday in the U.S. journal "Science," researchers used updated techniques to get a more precise date for the impact -- 66,038,000 million years ago -- which they said was accurate within 11,000 years.

"When I got started in the field, the error bars on these events were plus or minus a million years," said paleontologist William Clemens, a UC Berkeley professor emeritus who was not directly involved in the study.

The researchers also updated their estimate for the time the mass dinosaur extinction, and found that the date was within the same margin of error -- in other words, at around the same time as the asteroid impact.

"We have shown that these events are synchronous to within a gnat's eyebrow," said Paul Renne, of the Berkeley Geochronology Center at the University of California, Berkeley.

"The impact was clearly the final straw that pushed Earth past the tipping point," he said.

But there were other factors as well, he said, including dramatic climate variation over the previous million years, which probably brought many species to the brink of extinction.

"These precursory phenomena made the global ecosystem much more sensitive to even relatively small triggers, so that what otherwise might have been a fairly minor effect shifted the ecosystem into a new state," he said.

"The impact was the coup de grace."

The dinosaur extinction -- which wiped out the large land-based behemoths as well as many ocean creatures -- was first linked to an asteroid or comet strike in 1980, by UC Berkeley professor Luis Alvarez and his son Walter.

The impact created a crater, now called Chicxulub, some 110 miles (177 kilometers) wide in the Caribbean, off the coast of Mexico.