Rebels Seize Most of Army Base in North Syria 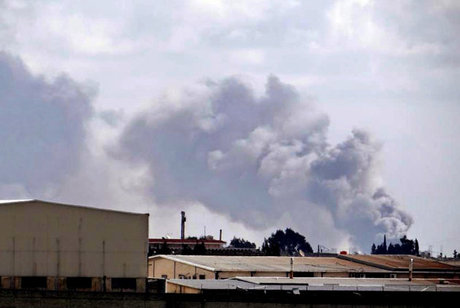 Syrian rebels took control of most of a strategic army base in northern Syria after a fierce firefight with President Bashar Assad's forces on Wednesday, a monitoring group said.

The military complex, known as Base 80, is tasked with securing the nearby Aleppo international airport as well as the Nayrab military airport.

Rebels launched a coordinated assault on both airports on Tuesday, according to the Syrian Observatory for Human Rights, which added that most of Base 80 "has come under insurgent control".

Dozens of fighters and troops have been killed in the fighting, the Britain-based Observatory said.

Activists have said Aleppo's insurgents shifted their focus from targets in the provincial capital to air bases because they are a source of ammunition and weaponry, and to put out of action warplanes used to bomb rebel bastions.

In Aleppo city itself, meanwhile, electricity or water supplies were down on Wednesday for a fourth day in a row, said the anti-regime Aleppo Media Center, warning of a "humanitarian disaster" in what was once Syria's commercial hub.

Commenting on the rebels' advance in Aleppo province, Observatory director Rami Abdel Rahman said the army may be giving up on parts of northern Syria in order to secure the center.

"The army is barely resisting the rebels' advance on bases in the north. Meanwhile, it is resisting with ferocity the insurgents in Daraya (southwest of Damascus) and Homs (central Syria)," Abdel Rahman told Agence France Presse.

"The regime understands it cannot survive a transition without securing some land to bargain with," he added.

Despite the advances, regime warplanes carried out several air raids on rebel areas in Aleppo province on Wednesday while army tanks shelled the east Damascus district of Jobar, the Observatory said.

At least eight civilians were killed in Jobar, it said.

Insurgents have secured enclaves in the eastern and southern suburbs of Damascus, and the army is trying hard to push them out, the watchdog said.

On the eastern and western edges of the central city of Homs, rebels clashed with troops on two main highways, a rebel commander said.

Arraba Idriss told AFP via Skype that the insurgents are trying to "ease the pressure on people trapped in districts that have been besieged and bombarded" for some eight months by the army.

At least 121 people were killed in violence across Syria on Wednesday, half of them civilians, the Observatory said.

Keep up the good work FSA.

Wow...nice language. Hide behind your screen like the lilpuss you are. Filthy peasant!

It is a mistake to try and import what is happening in Syria to Lebanon. In Lebanon, there is a considerable margin of freedom while in Syria, it is an absolute and brutal dictatorship. In Lebanon, we have an almost 50/50 split. HA is not going anywhere in the near and medium term. One can hope that they will moderate their stances.

With the fall of the airports, aleppo will be effectively cut off. Once the north is fully liberated, the revolutionaries must show their ability to effectively governs. Otherwise people will be longing for the days of Assads.

This shows that Assad forces are strained. They are concentrated defending Damascus, homs and Hama and cannot cope with the rest of the country. When the north will be liberated, the turn of the other cities may come. The program may be know but how long will it take?

It took the Afghan rebels ten years and 1 million victims to bring down the communist regime which was also supported by Russia. Damascus will fall in the next two years and the war will move to the Latakia coast and to the bekaa valley.

Get one of those MIGs from Nayrab airport and bomb Assad's residence out of the face of this earth.

if you read the article you would deduce that the syrian army is consolidating its grip on central syria and is almost voluntarily abandoning bases in the north. then again, your messages are barely legible, english is not your forte

WshingtonPost famous a columnist David Ignatius revealed one letter dated on 4th feb 2013, in which Brigade Gen. salim Idriss requested so many on the lists. Those include toseek the assistance of the US in training for 1>special operation, 2>international humanitalian law, 3> to confront with the chemical weapon security. addition to above, he requested further that 1>combat armour, 2>night vision goggles, 3> hand held monocular,4> strategic spotting equippment and 5>tactical communication so forth. to target the military base, under the operation of the FSA for the future Defense Department of Syria need to consult with the US such a matter by a letter. I am amzed by the fact that it is possible to consult, it quite possible to take them into the US consideration, I think. I don't like the WashingtonPost repeatedly explain "the game changer" or "the end game" while they reveal the importnt dimension of the US operation.

Iran is using the she3a Arabs for its own agenda, they did not care for releasing the Lebanese in Syria precisely because they want the suni Shea hatred to grow , reconciliation between sheas and sunis would take away Iran's control. Iran was behind the assassination of hariri, the polarization of Lebanon gave Iran the control over Lebanon