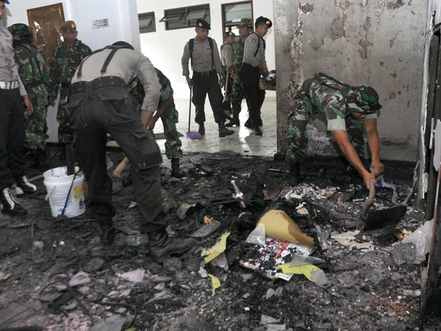 Police in the south of Sulawesi island reported three consecutive attacks between one and four in the morning, national police spokesman Agus Riyanto told reporters.

"As we understand, the attackers threw water bottles filled with flammable materials at the churches," he said, adding that the door of the first church caught fire.

Witnesses managed to put out the flames and the churches were only slightly damaged. No one was hurt, Riyanto said.

Attackers hurled petrol bombs at two other churches over the weekend in Sulawesi.

Parts of the island had a decades-long history of sectarian violence between Muslims and Christians, with thousands killed or displaced, before a 2001 peace agreement.

Two weeks ago a minister in the west of the country's main island of Java was jailed for three months for holding services at his Pentecostal church. Authorities claimed the church did not have a permit to conduct religious activities there.

In Bekasi city near Jakarta, authorities Thursday sealed a mosque where followers of the Islamic Ahmadiyah sect worship and announced a mayoral decree banning all Ahmadiyah activities in the city.

Followers of Ahmadiyah do not believe Mohammed was the last prophet and are regarded as heretics by conservative Muslims.

Several regulations have banned them from proselytizing in Indonesia, but the Bekasi decree is the first to place a blanket ban on all the sect's activities.

Around 90 percent of Indonesia's 240 million people identify themselves as Muslims, with the vast majority practicing a moderate form of the faith.