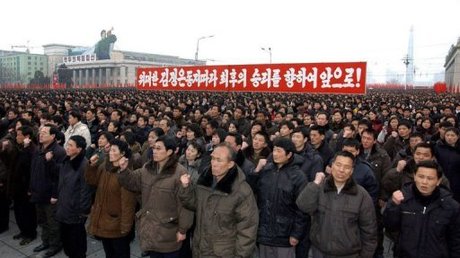 The rally in the capital's sprawling Kim Il-Sung square on Thursday was attended by top party and military officials, as well as police workers and students, the official Korean Central News Agency (KCNA) said.

A number of speakers addressed the rally, praising Tuesday's test as the "brilliant fruition of the extraordinary decision and matchless gut of the dear respected Kim Jong-Un", KCNA said, in reference to the leader's courage.

The young leader, who took over after the death of his father Kim Jong-Il in December 2011, did not attend the rally.

It was the North's third test, following previous detonations in 2006 and 2009, and seismic data suggested it was significantly more powerful.

"It serves as a striking demonstration of the might of a scientific and technological power and a military power capable of manufacturing any strike," KCNA said.

North Korea said the test -- widely condemned by the international community -- was a direct response to U.N. sanctions imposed on Pyongyang after its long-range rocket launch in December.

Pyongyang accused the United States of leading the sanctions charge in the U.N. Security Council, and speakers at Thursday's rally threatened "merciless retaliatory blows" if the U.S. pushed tougher sanctions after the nuclear test.

I don’t want to be curl, but I could see many similarities between N. Korea and Iran. They both care about a program that is meaningless while their nations are starving. I am also unsure as to whether Israel minds Iran falling into these quick sands. They are intelligently exploiting this issue to drag the USA into its quick sand. They are also benefiting from fomenting the dire situation in Syria to create cracks into the unity of the Arabs and it’s winning to a large extent. What I still can’t fathom is the fact that although Iran and the Arab are both Muslims, why on earth should they fight each other instead of teaming to confront Israel? Our struggle with Israel would not prevail by arms but by unity and rationality which unfortunately is not the case.

That is because Arab leaders are hated paid collaborators of Zionist America. But, the huge US deficits in the near future will no longer enable to buy Arab governments to be dominated by Israel.

puppets...at least they are organised puppets. In Lebanon we also have puppets but they are chaotic puppets and they are under the illusion that each one of them is a semi-god.

A most horrible dictatorship turned North Korea into a large prison. People are herded to the streets on demand to approve whatever the government does.
The North Koreans are very poor and deprived from basic needs yet their government forces them to celebrate a Nuclear test!

Unlike the Evil American Empire, this "horrible dictatorship" has never used NUKES against any country, has not invaded, occupied, and killed millions of men, women, and children around the world.

Go and stay there bigjohn. North koreans are eating their childs they will appreciate a change.

Go and stay there bigjohn. North koreans are eating their children they will appreciate a change.

WHY IS IT MEANINGLESS?? why does America and Russia and Britain and China have the right to do such similar tests and the media does not even comment them? and they dont get any sanctions? why are they allowed to have hundreds of Nuclear Warheads and thousands of continental Nuclear Scuds and Iran and korea do not have the right? Do you believe that the Koreans will Attack anybody? if the media doesnt treat them like this and the world does not impose sanctions on them they would do these tests just to show that they are powerful but not to harm anybody! WHY IS IT ALWAYS FOR YOU THAT THERE IS SOMEONE CALLED AMERICA THAT IS ALWAYS RIGHT AND LOVELY AND THE REST of the 3rd world that is trying to upgrade itself are Evil? Hypocrits ! sheaps and satanic that is what you are !!!!

I finaly know what Flamewaten looks like. He's wearing a red hat and is positioned in the back of the photo!