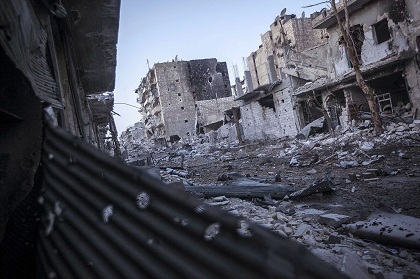 Syria's army and rebels were preparing Friday for a major battle for control of strategic airports in Aleppo, a watchdog said, four days after insurgents launched assaults on airbases in the northern province.

The Syrian Observatory for Human Rights said intermittent clashes were reported around Aleppo international airport, Nayrab airbase and another military complex as the two sides readied for a major fight.

"The army is preparing a large-scale operation to take back control of Base 80," Abdel Rahman added, referring to a military complex tasked with managing both Nayrab and Aleppo airports.

Rebels seized the base on Wednesday after a battle that left at least 150 dead from both sides, among them senior army officers, said the Observatory.

Insurgents fighting President Bashar Assad's regime "are trying to take control of Nayrab and to destroy the runways at Aleppo international airport, which the army is using for military purposes," said Abdel Rahman.

Activists in Aleppo have said the rebel Free Syrian Army shifted its focus weeks ago from the city to airbases in the province.

Insurgents see the capture of airports such as al-Jarrah, also in Aleppo province, on Tuesday as a way to seize large amounts of ammunition and to put out of action warplanes used by the regime air force to bombard rebel-held areas.

Regime tanks, meanwhile, shelled the town of Khan Sheykhun in the province of Idlib, killing at least 11 civilians, said the Observatory.

In Damascus, the army shelled the eastern district of Jobar, where rebels have set up enclaves, the Britain-based group said.

Friday's violence came a day after at least 155 people were killed across Syria, it said.

When will Bashar put the national interest above his own and agree to a transition period?

Remember the days when opposition voices were unheard of? Remember when the demonstrations were peaceful for a whole year and unarmed demonstrators were being shot like stray dogs? Now. Half of the country is in rebels hands and everyday a New town or airport falls...seriously the brainwashed puppets that stupidly believe that Bashar will prevail u need a reality check!