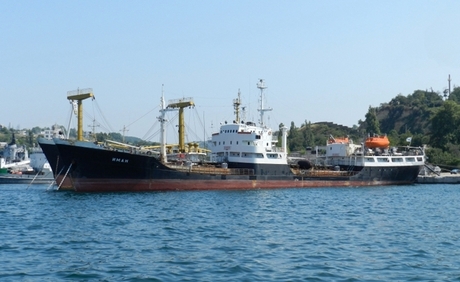 Finnish customs said Friday they had seized military equipment en route from Russia to Syria on board a Finnish ship docked at Helsinki's Vuosaari port in January.

During an inspection of the ship, customs officials discovered spare parts for tanks in a container on board the M/S Finnsun, Finnish Customs said in a statement.

According to preliminary information from the agency, the container was en route from Russia to Syria.

The customs authority's crime division has opened an investigation into the illegal export of military equipment. Four crew members have been questioned as suspects, the statement said.

M/S Finnsun is owned by Finnlines, one of the biggest shipping operators in the Baltic region, which is owned by the Grimaldi Group.

The European Union has banned all sales, delivery, transfers and exports of weapons to Syria.

They must be trying as the saying goes "If at first you don't succeed, try and try again".

EU is not International law UN sets the rule countries should follow international rulings Russia sending military parts to syria is not breaking any international laws .What about arms to Rebels being sent by us & EU Nations Thats what you would call breaking the law supply none government rebels with weapons theses rebels are not people elected to do the job they are doing. but use violence to get what they want very democratic but we keep supplying arms to them and we all know they will be wears then the Assad's but thats ok is it i think russia should do more to arm assad not because i like him but because he is better then what will follow if he falls