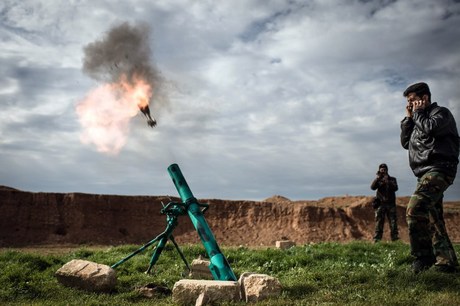 Syrian rebels on Sunday captured army checkpoints near Nayrab military airport in the northern city of Aleppo, in the eastern province of Deir Ezzor and in central Hama province, a watchdog said.

In Aleppo, fierce clashes took place between Syrian troops and several rebel battalions, which resulted in the insurgents taking over the checkpoint near Nayrab airport, the Syrian Observatory for Human Rights said.

Nayrab is adjacent to Aleppo international airport, a key target for the rebels, who have also been battling troops guarding Kweyris military airbase east of the city and Menegh airbase to the north.

The Observatory, which collects its reports from a network of activists and medics in civilian and military hospitals on the ground, said at least six soldiers and a number of rebels were killed in Sunday's fighting.

Fighter planes carried out raids on rebel groups encircling the military defense factories in the town of Safireh east of Aleppo.

In the eastern province of Deir Ezzor, rebels lost five men before capturing the Kibar checkpoint, seizing stores of weapons and ammunition and killing at least four soldiers, the watchdog said.

The districts of Sheikh Yassin and Hamidiyeh in the embattled city of Deir Ezzor came under army bombardment as warplanes circled overhead.

In the central province of Hama, the rebels lost one of their commanders when they took control of a military checkpoint near the town of Qalaa al-Maziq, where heavy regime shelling killed three people, including a child.

The Observatory also reported that five soldiers were killed defending Tel Osman checkpoint before it fell to the insurgents.

East of Qalaa al-Maziq, regime forces stormed the town of Mork, which has seen several rounds of fighting, with advancing troops being pushed back by the rebels, and then entering again, the watchdog said.

Mork is located on the highway connecting Hama to the strategic northwestern city of Maaret al-Numan, whose capture by the insurgents last October has hampered army supply lines to Aleppo further north.

Regime forces are pushing to take back the strategic stretch of road.

The Observatory gave an initial toll of 42 people killed on Sunday in Syria, where the U.N. estimates that nearly 70,000 people have died since the outbreak of the uprising in March 2011.

they're crying foul because the superior "iranian militia" forces intervened in a few villages. laughable

I agree with your comment, it isn't about Shia it's about Hezbollah and the political agenda and killings. But I'll never vote down al-kafi. He's a friend.

anyone who is aiding ASSad cannot be classified as properly worshiping God (whether they'r shia, sunni, maronite, keldan, alawite...whatever...)

what made me make this call is the same teachings that make me call Zionists not worshiping God because of their treatment of Palestinians.

When you are poor and weak it is easy to be mislead by those who have the money, the plan, the will and the support of Iran. It is well known that if you want to make sheep out of people, starve them first .......... and this applies to most Lebanese now unfortunately, not just the Shia.

I wonder how Assad's last days will transpire-- -- he must be made to slowly feel the pain that he has caused his people before his miserable life is snuffed out. Shame on the Lebanese for backing foreign powers against their own people and looking up to those nasty and odious Iranians for support.

when anyone says something about shia fighting in Syria, they mean those following iran, so their comment is not racist.
the real problem is that the majority of shia are supporting iran, thus making everybody else hating them.
it is up to the shia community to step up against these Iranian terrorists.

what is really racist is the systematic demonization of the sunnis.

is it not demonizing when in each of m8 comments you come back to salafis? :)
that is a funny comment from you :)