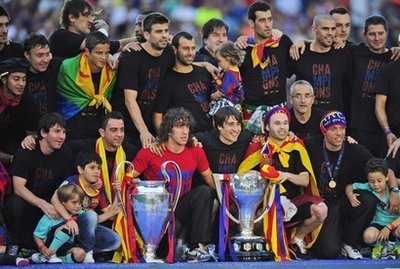 As Lebanon has plunged into turmoil with the absence of a new government and the growing confrontation between the March 8 and 14 forces, Caretaker Minister Jebran Bassil and the aide of either the speaker or the Hizbullah leader attended the Champions League Final, reported As Safir daily on Tuesday.

The newspaper said that Bassil and either MP Ali Hassan Khalil or Hussein Khalil were on Saturday among the crowds attending the football match during which Barcelona outclassed Manchester United 3-1 at Wembley to claim their second Champions League crown in three years.

Meanwhile, sources close to caretaker Prime Minister Saad Hariri denied reports that he had attended the game in London seeing as he was visiting the UK at the time.

They also denied to the Central News Agency that he had met with Change and Reform bloc ministers Bassil and Fadi Abboud and MP Ibrahim Kanaan who were present in English capital.

“Such information is inaccurate and false,” they stressed.

Goals from Pedro, Lionel Messi and David Villa secured a deserved victory for the Catalan magicians after England international Wayne Rooney had raised United's hopes with a well-taken first-half equalizer.

who let them in to England - they hate the satan England???

haha amazing...England the Satan..Death to Greater Britain..and then they DREAm of visiting the capital, following their way of life and celebrating enjoying their sports...They're nothing wrong with that BUT at least our ignorant dictators should admit that Lebanese and themselves love the European way of life...They're not Satans, they just outsmart us.

nothing wrong with enjoying the most important game of the year.... u haters go get a life

I dont hear anything regarding Hariri living in Saudi Arabia!

The only issue should be WHO PAID FOR THEM???
If it is their money I hope they enjoyed the game and wish they will recruit them and keep them there :)

If it is the govt money, no matter how much, they should head directly to prison.