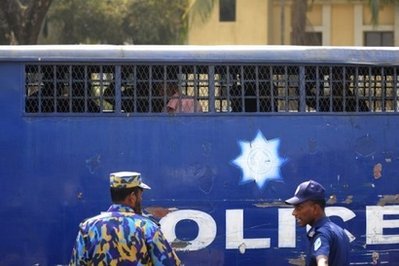 A Bangladeshi man who had his penis cut off by a woman who then took it to the police as evidence of attempted rape said Tuesday he was the victim of a revenge plot by his former lover.

Mozzammel Majhi's penis was severed by the 40-year-old woman, a married mother of three, who said she was attacked while sleeping. She gave the penis to police, who are keeping it at the police station in a jar of formaldehyde.

Majhi told Agence France Presse he had had a 15-year relationship with the woman, who is from Jhalakathi district, some 200 kilometers (125 miles) south of Dhaka.

"I am a double victim: first, she cut my penis and now police say they are going to arrest me for attempted rape," Majhi said by telephone from his hospital bed in the city of Barisal.

Majhi, a 40-year-old father of five, claimed he had been seeing the woman for years and that she had previously suggested they elope to Dhaka together.

But local police chief Abul Khaer said that initial investigations of the incident on Saturday night supported the woman's version of the story.

"We are treating this as an attempted rape case because the incident took place at the woman's house," he said.

"Why did he go there? We shall arrest him once his condition gets better," he said, adding that if convicted, Majhi could face life in prison.

The woman has said Majhi had been harassing her for six months prior to the attack.

Majhi was hospitalized in a critical condition, but he had since improved, doctor A.B. Sharfuzzaman told AFP.

"We have informed police that he is now in our wards," he said, adding they had tried to sew the penis back on, but that "it was too late so the severed part was returned to police.”

"We have done some operations and he will be able to urinate normally once he gets better," he said.

Conflicting reports said the woman had used a knife or a razor blade in the attack.