After The Ash, Iceland Gets New Volcanic Fragrance 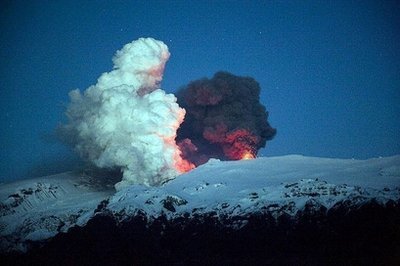 A designer who shot to fame with a line of perfume inspired by last year's flight-halting Eyjafjoell volcano said Monday she would launch a new fragrance drawn from last week's eruption on Iceland.

After launching "EFJ Eyjafjallajoekull," a women's perfume made from melt water from the glacier sitting on top of the Eyjafjoell volcano that erupted in April last year, Sigrun Lilja Gudjonsdottir said she would soon launch the "VJK Vatnajoekull," a fragrance for men named after the glacier that straddles Grimsvoetn.

"When the eruption started (on May 21), my heart really started to beat real fast," Gudjonsdottir told Agence France Presse, adding that she had quickly decided to rethink and rebrand a perfume already several months in the works.

"I said to myself, ok, now we really have to speed things up," she said.

The new fragrance will also be made of glacial melt water and, like last year, will be made in Grasse, France's perfume capital.

While the final scent has yet to be decided upon, Gudjonsdottir said it would be a "very masculine" fragrance that would evoke the power of Grimsvoetn, which initially spewed ash 20 kilometers (12 miles) into the air.

And there should be plenty of melt water available: Iceland's most active volcano, which was declared dead Monday, sits at the heart of Europe's biggest glacier.

The "VJK Vatnajoekull" is expected to hit stores in the second half of the year, with the aim of repeating the success of its predecessor, which sold more than 2,000 bottles at a cost of about 80 Euros ($115) for 100 milliliters.