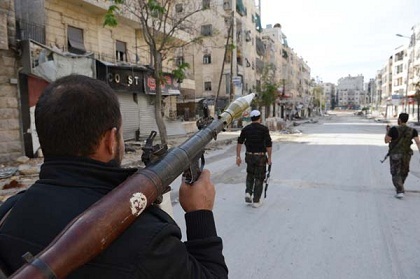 Syrian rebels on Tuesday pushed into the outer perimeters of a police academy in the northern province of Aleppo after a fierce two-day siege in which more than 70 combatants were killed, a watchdog said.

Regime forces retaliated with air strikes on rebels around the school, located near the town of Khan Assal, but were unable to halt their advance, the Syrian Observatory for Human Rights said.

"This is one of the largest police schools in the country. There are now clashes on the grounds of the academy but the rebels have not yet reached the main building," Observatory director Rami Abdel Rahman told AFP by phone.

In the past two days, clashes around the school have left 26 rebels, 40 soldiers and five members of pro-regime popular defense committees dead, the watchdog said.

Loyalist troops stationed at the academy fought back with mortars and rockets, while a number of soldiers defected and dozens were captured, it said.

The latest violence came after 154 people were killed nationwide on Monday, including 54 civilians, six of whom died in an apparent surface-to-surface missile strike on the northern province of Raqa.

The death toll also includes 59 regime troops and 41 rebels, including one Libyan, said the Observatory, which collects its reports from a wide network of activists and medics in civilian and military hospitals across Syria.