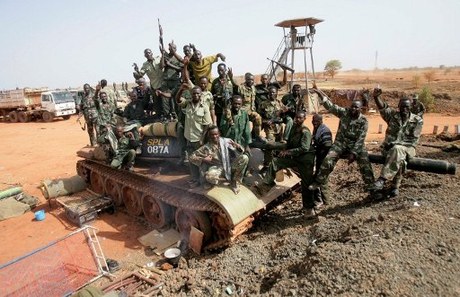 Heavy fighting has occurred between government and rebel forces in a strategic Sudanese border town, a source familiar with the situation said on Tuesday, giving the first independent confirmation of the key battle.

The fight for El Kurmuk -- which Sudan's army has denied -- is the most serious for more than a year in Blue Nile state, which has been largely sealed from the outside world.

"There has been heavy fighting since the start of this week," said the source, who cannot be identified.

Rebels claimed on Sunday to have pushed into Kurmuk's southwest.

Kurmuk, an important trading center on the Ethiopian border, is the third-largest town in Blue Nile and has been in government hands since November 2011.

Sudan's government severely restricts access to Blue Nile and South Kordofan, two states where the Sudan People's Liberation Movement-North have been fighting since 2011.

Khartoum accuses South Sudan of backing the SPLM-N but the South denies involvement.

The fighting has led to "truly appalling" conditions for civilians trapped in the region, U.N. humanitarian operations director John Ging said in January.

More than 200,000 people have fled as refugees to South Sudan and Ethiopia, the U.N. says.

An additional one million have been affected inside Blue Nile and South Kordofan, according to figures from the humanitarian wing of the rebels and data from the government's aid agency.

Ging said there are stories of "people having to rely on roots and leaves" to survive, and that those who escape the area are in an emaciated state.

Last year, the rebels and government failed to implement an international plan for delivering aid throughout the war zone, including to rebel areas.

According to the source familiar with the situation, the latest fighting has caused additional displacement because Kurmuk town is virtually empty.

Since then he has made little comment except to say fighting there continues.

"There is nothing new this morning," Lodi told Agence France Presse. "It's still going on."

Sudan's army spokesman Sawarmi Khaled Saad could not be reached, but he denied on Sunday that the rebels were near Kurmuk and said their claim was a "fabrication" designed to affect army morale.

International concern are rising over tensions between Khartoum and the South Sudanese government in Juba. The two countries failed to implement agreements, including a demilitarized border zone, which they hailed in September as ending a cross-border conflict.

SPLM-N fighters were allies of southern rebels during the civil war that led to South Sudan's independence two years ago under a 2005 peace agreement.

That deal failed to settle the role of ethnically diverse Blue Nile and South Kordofan within Sudan.

Kurmuk was a key battleground during Sudan's 22-year civil war.

The Sudanese Armed Forces (SAF) retook the town in November 2011 two months after fighting began with the SPLM-N.

"Kurmuk is very well-defended," a regional political expert said earlier. "It was very difficult for SAF to re-control and they would like to keep it, because it's a very strategic place."

The war in Blue Nile has generally not been as intense as the one in South Kordofan. An analyst has said the Blue Nile rebels were at "great disadvantage" there, partly because of the terrain.

But over the past 10 days the SPLM-N has reported intensified fighting.

Yasir Arman, the group's secretary general, accused the armed forces on February 17 of launching "a military dry season campaign" in an area about 20 kilometers (12 miles) southwest of Kurmuk.

He said there had been "heavy aerial bombardment from Sudan's air force," prompting 8,000 people to flee towards the borders of South Sudan and Ethiopia.