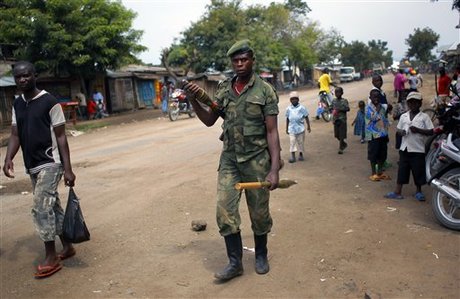 Battles between a militia and government forces in eastern Democratic Republic of Congo on Wednesday left one civilian dead and a U.N. peacekeeper among 10 wounded, a U.N. spokesman said.

The battles have heightened fears over renewed tensions in mineral-rich North Kivu province which has seen major conflict over the past year.

Deputy U.N. spokesman Eduardo del Buey said there had been "heavy fighting" between DR Congo troops and fighters from the Alliance of Patriots for a Free and Sovereign Congo, better known under its French acronym APCLS.

The fighting erupted near a small U.N. peacekeeping base at Kitchanga in the Masisi district of the province.

Del Buey said one civilian was killed, nine were wounded and a peacekeeper was shot in the arm and was now in "stable" condition. The spokesman said 400 people had taken shelter in the U.N. base and "the situation remains tense".

DR Congo forces and U.N. peacekeepers are trying to contain a number of rebels and militias in North Kivu, most notably the M23 group which briefly held the provincial capital of Goma in November.

Fighting between rival M23 factions has also been reported this week.