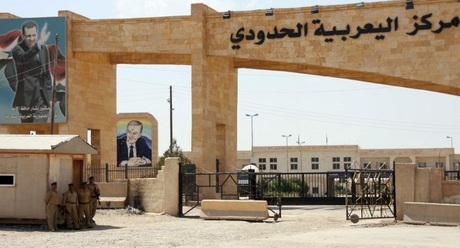 An Iraqi soldier was killed and three people including a soldier were wounded inside north Iraq in fire exchanged between regime forces and rebels in Syria, the defense ministry spokesman in Baghdad said.

The casualties were caused by "fighting at the Yaarubiyeh border crossing inside Syria" on Saturday, Mohammed al-Askari told Agence France Presse by telephone.

"The Iraqi forces that were hit by the fire were about 600 meters (yards) away from the crossing" into Iraq's Nineveh province, Askari said.

He also said that four wounded Syrian soldiers were treated at an Iraqi hospital during Saturday's fighting.

Mohammed Rahim al-Shammari, the head of the Nineveh provincial council security and defense committee, told Agence France Presse that no one was controlling the Syrian side of the crossing on Sunday, and that there was no activity there.

Baghdad has pointedly avoided calling for the departure of Syrian President Bashar Assad, who is locked in a bloody civil war with rebels opposed to his regime, and has instead urged an end to violence by all parties.

But U.S. officials have repeatedly called on the Iraqi government to halt Iranian flights to Syria via Iraqi airspace, which they say are transporting weapons to Assad's forces.