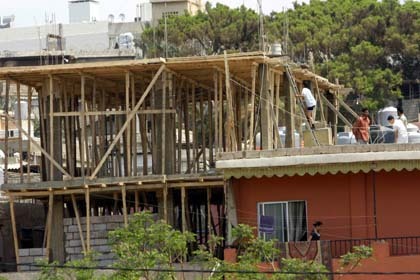 A protestor bit a policeman in his hand as he was seeking to end a building violation in the Ouzai district of Beirut’s southern suburbs, the National News Agency reported on Thursday.

The “bite-and-run” incident took place as a police force was seeking to demolish a building as part of their crackdown on illegal construction.

NNA said a group of residents, including women and children, tried to cordon off the area at al-Mdawra neighborhood in Ouzai. Then one of the protestors bit the policeman in his hand and ran away in a hit-and-run tactic.

nawar!... they should be all put into one huge tank and burnt.

this is amal and hizbo fault for encouraging such construction, and for creating little islands where police is not allowed to enter, or electricity billing staff for that matter..

Perhaps some of the $65 Billion stolen/squandered should have been used to build low-income housing for these citizens as is done in most other countries.

bidbigg is right the hezbs shiites have the right to use the weapons they got to supposedly fight israel for personal gain after all everyone knows two wrong male a right and groundhog hassan is divine.

Really? Is this the type of news that deserve to be on the main page, in the 'spotlight"?

Mowaten these people have built on property that doesnt belong to them,so what gives them the right to build where they want.They should have demolished the houses with everyone still it,dont give me a sad story oh but people need to live,they were good enough to spend money on building they can buy the land NOT steal,but then again all you M8 grubs think you own everything!