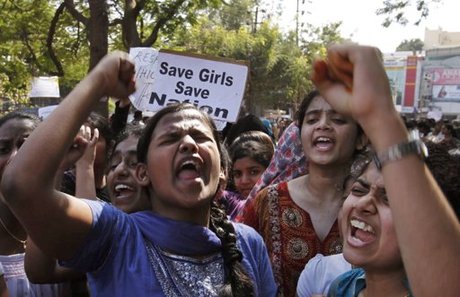 The main accused in the fatal gang-rape of a student on a bus in New Delhi last December was found dead in his prison cell Monday, prompting fury from the victim's family and accusations of murder.

Officials at the maximum-security Tihar Jail in the Indian capital said bus driver Ram Singh, 34, had hanged himself with a makeshift noose which he tied to a grille on the ceiling of his cell.

But Singh's parents said their son had been previously assaulted in prison and had told them about threats to his life, while his lawyer said the death should be treated as murder.

Singh was one of six people on trial over the notorious gang-rape on December 16 which appalled India and brought simmering anger about endemic sex crime to the boil.

"He tied all his clothes together and used the ceiling grille and a wooden stool to hang himself," the prison's law officer Sunil Gupta told AFP, adding that he was found dead shortly before dawn.

India's Home Minister Sushilkumar Shinde called the incident "a major lapse" by the prison service and said security would be boosted for four other suspects lodged in Tihar who appeared in court on Monday.

"It is a suicide, the preliminary reports show... but we are awaiting the inquiry report to come," he told a press conference.

The family of the victim, a 23-year-old physiotherapy student who was on her way home with a male friend when she was attacked, denounced the jail authorities and said Singh had escaped justice.

They have called for all the suspects to be hanged, a punishment used in India for the rarest of crimes.

"We don't understand how could the police fail to protect Ram Singh. They knew he was the prime accused," said the student's father, who cannot be named for legal reasons. "How could they let him choose the way he wanted to die?"

The horrifying case, which ignited sometimes violent street protests in December, has led to a toughening of India's rape laws as well as deep introspection on social attitudes to women and the apparent rise in sex crime.

Singh was making regular appearances in a fast-track New Delhi court where the proceedings are subject to a media gagging order.

All five adult suspects including Singh pleaded not guilty to charges including rape, murder and kidnapping.

A sixth 17-year-old suspect is being tried in a juvenile court where he faces a maximum three years imprisonment.

Ram Singh's father, Mange Lal Singh, admitted that his son had talked of his guilt over the crime.

"My son told me that he was ashamed by what had happened on 16 December. He said that he would accept whatever punishment was given to him by the court," he told AFP near the family's shack in a New Delhi slum.

He also said that his son, who claimed he had been threatened and sodomized by other inmates, would have struggled to rig up a ligature as a result of a hand injury he sustained in a road accident several years ago.

"He couldn't have committed suicide with just one hand," he said.

"If he had committed suicide then he would have left a suicide note," he told AFP.

Singh's body has been taken to the government-run Deen Dayal Upadhyay hospital in the capital where an autopsy is expected to determine the cause of death.

The gang-rape victim died on December 29 at a hospital in Singapore where she was transferred for treatment.

As well as being repeatedly raped by the men while being driven around the capital, she was also sexually assaulted with a metal bar, leaving her with massive internal injuries.

Singh, a widower whose younger brother Mukesh is also one of the accused, was the regular driver of the private bus allegedly used for the crime which was normally used to ferry schoolchildren.

He was the first to be arrested after the attack when the police pulled over the vehicle the next day. Detectives immediately became suspicious because the seats of the bus had been freshly cleaned.