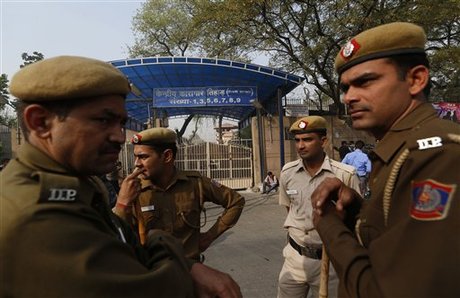 Indian doctors conducted a post-mortem on Tuesday on the main accused in the New Delhi gang-rape case who was found dead in his jail cell after apparently committing suicide, medical sources said.

The death of 34-year-old Ram Singh in the maximum-security Tihar Jail on Monday led to accusations from his family and lawyers that he had been murdered, with the post-mortem set to determine the cause of death.

The report, compiled Tuesday morning by doctors at the government-run AIIMS hospital according to legal and hospital sources, will be presented in court later Tuesday where Singh was being tried for murder, rape and kidnapping.

The government has ordered an inquiry into the death, with Home Minister Sushilkumar Shinde calling it a "major lapse".

Singh was charged along with four other men and a 17-year-old over the brutal attack on a physiotherapy student who was lured on to a bus in December and repeatedly raped.

Left with horrific internal injuries, she died 13 days after the assault, leading to an outpouring of anger over endemic crime against women in India and a review of rape laws.

Officials at Tihar Prison said Singh committed suicide before dawn on Monday morning, having strung up a noose in his cell which he attached to a grille on the ceiling.

His lawyer and newspapers have questioned how the heavy-drinking bus driver -- who had a damaged arm from a road accident -- had managed to hang himself without waking the other men in his cell or being seen by a guard.

Singh was accused by police of being the ringleader in the gang-rape.

On the night of the December 16 attack, the suspects allegedly gathered at his home for dinner and drinks before taking the bus for a joyride, luring on board passengers who mistook the vehicle for genuine public transport.

Singh, a migrant from Rajasthan state, was the first of the accused to be arrested after police pulled over the private bus, which was normally used to ferry schoolchildren.

All five adult suspects including Singh pleaded not guilty to the charges.