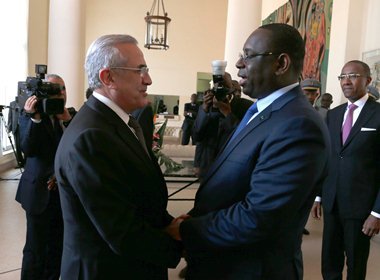 President Michel Suleiman said Wednesday that rival leaders should adopt an electoral vote law that is consistent with the Taef accord away from political confessionalism.

MPs should “find a law that is consistent with the Taef and does not take back (the country) to sectarian laws,” Suleiman told Lebanese expatriates in Senegal on the second day of his visit to the West African country before heading to the Ivory Coast on Thursday.

“If we weren't able to find a law that is in harmony with the Taef, then I hope that the expatriates would not vote based on a sectarian law,” he said at an event hosted by the Lebanese ambassador at the Grand Theatre National in Dakar.

Suleiman also said Wednesday that he wanted to "expand and enhance" economic partnership with Senegal.

Lebanon, and especially Lebanese expats, are already investing heavily in Senegal across a wide variety of sectors including food products, textiles, chemicals, plastics and rubber.

"We will work with the (Senegalese) authorities to put in place the necessary mechanisms, conventions and agreements to develop and expand the scope of our cooperation," Suleiman was quoted as saying by the Senegalese Press Agency.

Suleiman, speaking at a Senegal-Lebanon economic forum in Dakar, had arrived Tuesday to "strengthen and raise the level of bilateral relations,” he said, noting that Senegal and Africa "are important for Lebanon.”

Lebanese settlers first arrived in Senegal in the 1860s, taking jobs as street vendors before moving into the trade in peanuts, the main product grown in Senegal, eventually supplanting the French colonialists.

Abourisk Samir, a Lebanese community leader, told Agence France Presse up to 30,000 people originating from Lebanon were currently thought to be living in Senegal.

"The Lebanese control 50 to 60 percent of Senegalese economy, across all sectors," he added, citing figures from the World Bank.

The community got its first representative in government last April in the shape of Ecology Minister Haidar El Ali.

During his two-day visit to Senegal, Suleiman met with top officials, including the country's president.

Suleiman told Arab ambassadors based in Senegal on Tuesday that there should be dialogue to achieve results in countries witnessing turmoil.

“We don't back violence to achieve demands,” Suleiman said.

His first stop in his African tour was Algiers where he held talks with Algerian President Abdelaziz Bouteflika.