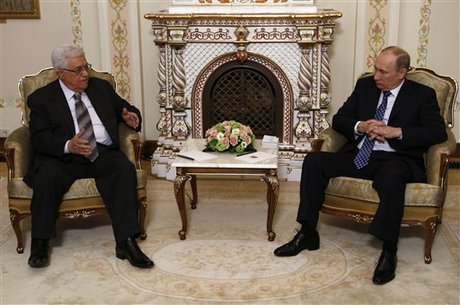 Palestinian president Mahmoud Abbas told Russian leader Vladimir Putin on Thursday he hoped to establish peace talks with Israel later this year while admitting that the chances for progress were slim.

Abbas said during a visit to Moscow he hoped "that later this year, we will see the start of substantive negotiations with Israel".

"Although the chances for this may not be great, we still hope to reach a political settlement on the basis of the principle of a two-state solution," Russian news agencies quotes Abbas as saying.

Israel and the Palestinians have not had direct negotiations for nearly three years -- a period that has seen the construction of new and highly controversial Israeli settlements in the West Bank.

Abbas's authority has also slipped in the interim as his Fatah movement fights for influence with the resurgent Gaza-based Hamas.

Moscow and the Palestinians enjoyed close relations in the Soviet era and the USSR in 1988 recognised an independent Palestinian state -- a policy continued by post-Soviet Russia.

Putin told Abbas that Russia was ready "to do everything that we are able" to get peace talks back on track.

He said ties between Russia and the Palestinians "rest on an historic foundation, which will undoubtedly help us build relations both today an in the future."

Abbas began his visit by laying a wreath at the Kremlin's Tomb of the Unknown Soldier. He is expected to meet Prime Minister Dmitry Medvedev later Thursday.