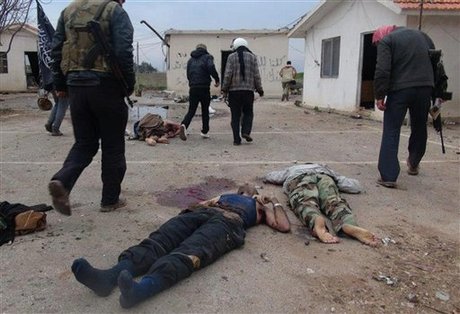 Syrian regime forces pounded parts of Damascus during the night, sending residents fleeing from the northern Barzeh district, as fighting also raged in the northern city of Aleppo, a watchdog said Saturday.

The Syrian Observatory for Human Rights said regime shelling continued on Saturday and also affected the Palestinian Yarmuk refugee camp along with the Jubar, Barzeh and Qaboon neighborhoods of Damascus.

The shelling was particularly fierce in Barzeh, the watchdog said, adding that snipers were deployed in the district as residents were reported fleeing the area.

The Observatory said fighting also raged in the northern city of Aleppo, with at least 12 rebels reported killed amid clashes with regime troops near the international airport.

The Syrian Revolution General Commission -- an activist network on the ground in Syria -- reported regime troop reinforcements being deployed in Daraya, a suburb south of the capital.

It reported "five tanks and three trucks accompanied by several cars and buses carrying soldiers from the Mazzeh military airport" heading towards the area, where government forces have for months been trying to establish control.

Meanwhile, in the eastern city of Deir Ezzor, the Observatory reported heavy fighting in the Huweika district and a car bomb blast near a building housing regime forces. There were no immediate details on casualties in the explosion.

The Observatory says rebel forces control approximately 30 percent of the strategic town, which is located near oil fields and close to the Iraqi border.

The Observatory, which collects information from a network of representatives and medics on the ground in Syria, put the death toll for Friday at 216 people, one of the highest figures in recent weeks.

On Saturday, the United Nations Relief and Works Agency, which helps Palestinian refugees, said a member of its teaching staff had been killed in the Khan Eshieh camp, southwest of Damascus.

Nasri Khalil Hasan was killed by shrapnel that hit him as he fled his home under artillery fire, UNRWA said, adding that Hasan was the sixth member of its staff in Syria to be killed in the conflict.