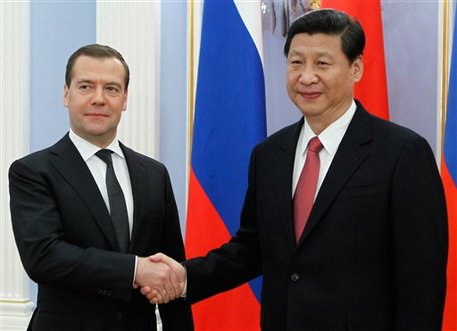 China's new leader Xi Jinping flew out off Moscow on Sunday morning to begin a tour of Africa after declaring his first foreign visit as president a success and overseeing the signing of a number of energy deals.

Xi flew out at 8:00 am local time (04:00 GMT) to Tanzania, where he was set to give a major speech on relations with Africa.

From there, he is due to visit South Africa, joining the leaders of Brazil, India, Russia and South Africa at an emerging economies summit before flying on to Congo-Brazzaville.

The Chinese leader, who traveled to Russia along with much-watched first lady Peng Liyuan, told Russian Prime Minister Dmitry Medvedev that his choice of Russia for his first foreign visit was "in order to show this importance, this special character of our relations."

"I can say that from my point of view, my visit has already achieved its aim and the results have already far exceeded my expectations," Xi told Medvedev on Saturday.

"I am very satisfied with the results of my visit."

He met his Russian counterpart Vladimir Putin on Friday and oversaw the signing of around 30 energy and other agreements during the three-day visit.

"We can already say this is a historic visit with positive results," Putin said after he and Xi presided over the signing of an agreement between Russian oil company Rosneft and China's state-owned CNPC.

During a packed schedule, Xi on Saturday met the speaker of Russia's lower house of parliament, Sergei Naryshkin, a top Putin ally.

He also met Russian Defence Minister Sergei Shoigu and became the the first foreign leader to visit the control center for the Russian armed forces.

Xi hailed Russo-Chinese close relations as a guarantee of international peace during a televised speech on Saturday.

"We must always be kind neighbors, good friends and reliable partners," he said.

The trip came after China this month completed a power handover which will see Xi preside over the world's second-largest economy for the next decade.

Once bitter foes during the Cold War, Moscow and Beijing have boosted cooperation in recent years to counterbalance US global dominance.

At the UN Security Council, China and Russia have both vetoed resolutions to impose sanctions on Syrian President Bashar Assad's regime, which is locked in a bloody two-year conflict with opposition rebels.