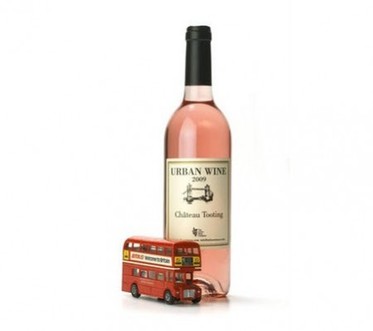 On balconies, in gardens and on the facades of their houses, Londoners are growing vines to create their own "urban wine" -- although the great vineyards of the world have little to fear just yet.

In 2007, urban regeneration specialist Richard Sharp was on holiday in France and became fascinated with the "community spirit" of French villages during the harvest, wondering whether the same could be achieved in Britain.

"A lot of people have vines (in London) but don't know what to do with the grapes," said Sharp.

He placed an advertisement in a newspaper asking amateur viticulturalists to contribute to a collective, and set out to look for a wine press to make wine.

The ad attracted "a lot of interest", he said, and so the Urban Wine Company was born.

After an initial, highly limited season that yielded just 20 bottles of rose, the idea rapidly spread around the gardens of London and southeast England.

"At first, I thought it was a con. I thought they would take my money and leave," said Ann Warner, a retiree from the southern suburbs of London, who initially saw it as a way to get rid of dozens of kilos of grapes she didn't know what to do with.

"We tried to do our own wine but it was disgusting. It's still in the cupboard. With the detergents," she laughed.

The tipple made with the help of Urban Wine is "worth the effort", Warner says, sipping a cold glass of "her" rose at Le Gothique, a south London bar where the group holds its yearly uncorking ceremony.

"And the best part is to put it on the table with the label Chateau Warner," the family name, adds her husband Colin.

The rest is sold to members at £8 per bottle, and whatever is left after that to the general public at £9 pounds via the collective's website and a specialist wine merchant in London.

All 1,200 bottles from the 2009 season were sold, a few hundred of them to outside clients.

Any profits are to be ploughed back into Urban Wine, based in Tooting, south London, though currently the organization is breaking even.

Some growers contribute only the minimum of three kilos of grapes per season, while others like Jane Reed give around 100 kilos.

"We decided to call it The Beast", Reed said, pointing to a vine she planted in her garden 20 years ago when it was just ankle-height. "It was purely decorative, but then it grew."

The vine now has a trunk about a meter (three feet) in circumference, with massive leaves rising to the roof of her terraced house in south London -- also providing a refuge for squirrels trying to avoid the neighborhood fox.

A self-described wine connoisseur, Reed has a house in France's wine-growing Burgundy region and says the London vintage "can't compare with Meursault", her preferred wine.

Richard Sharp concurs, admitting: "We're not going to compete with the best winemakers."

That may be putting it mildly. At the tasting for the 2010 vintage, a bottle of blackcurrant syrup stands next to the Urban Wine bottles.

"I'd recommend you mix it. You may not like it without it," recommends the company's public relations woman.