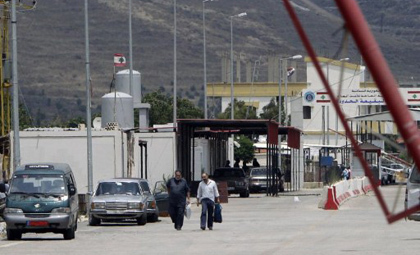 The state-run National News Agency reported on Tuesday that the shells hit Lebanese territories due to the intense fighting along the border with Syria.

The news agency reported that several families fled the town to safer places amid fears that the situation might deteriorate, calling on the Lebanese state to protect them.

Mortars and shells from the Syrian side regularly crash in Lebanon, causing several casualties. But Lebanese forces have never fired back despite promises of retaliation.

More dangerously, Syria's conflict has heightened deep rivalries and sectarian tensions in Lebanon, which is divided between pro-Syrian President Bashar Assad and anti-Assad factions, a legacy of the nearly three decades when Damascus all but ruled Lebanon, until 2005.

The U.N. says more than 70,000 people have been killed in Syria's two-year conflict, which broke out after the army unleashed a brutal crackdown against dissent, turning the uprising into a bloody insurgency.

do we even have an army?

and the so called resistance should just change its name to something else...

The KSA & the GCC states are all behind this mass murder that is occurring in our land & Syria .