Arslan Insists on Getting a Portfolio 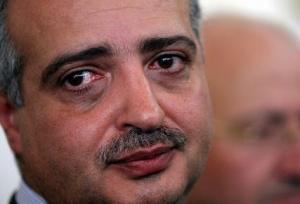 Lebanese Democratic Party leader MP Talal Arslan said that a meeting held between March 8 officials in parliament on Wednesday focused on solving the obstacles that are delaying the cabinet formation.

Arslan told As Safir newspaper on Thursday that hints that a dispute between President Michel Suleiman and Free Patriotic Movement leader MP Michel Aoun was obstructing the formation of the government are “not true.”

The newspaper reported that there are ongoing obstacles in the portfolio that will be assigned to Arslan and the Sunni opposition representative.

The MP reiterated his rejection to be assigned as a State Minister. He has repeatedly demanded a portfolio as a condition for his participation in the cabinet.

As for Hardan, he said that the expanded meeting paved way for communication among the different parties.

He told As Safir that the meeting was “positive” and “necessary” because it set the country’s best interest and the cabinet formation as a priority. “The Premier-designate should speed up the government formation process,” Hardan said.

Arslan is a nobody that does not deserve anything, yet he sets conditions too?

Heck parties who don't believe in Lebanon got ministerial positions courtesy of Syria and later it's friends so who can blame the boy Talal for dreaming on one for himself.

Ya kerr Ya beari. This is gone too far. Why dont they pick real Lebanese young people who can change the country around for the best. Most of these people have no education whatsoever. If they have some its from the Flinstones age.
Its the damn 21st century get rid of them stoneaged people and Lebanon will resurface. I am 61 and from the day i was born the same names were in the gov and their kids and grand kids are taking over. Thats Tribal and not democracy. In Lebanon if you dont have some big shot to back you no matter how many degrees you have you will never get a job. Our young people are leaving the country because they cant get jobs in their own. What a shame.

Ya Haram
Yes make him a minister why not ....let him join the club.
Why Lebanon needs technocrats government......and we have the Arslan and company.....use them and be the joke of Banana republics.
I forgot one important thing.............then we can blame all failure on Israel, USA and the others .....put it all in the same basket
The basket of usefulness and ignorance

Prince Talal will end up having the ministry of AL CHABAB WEL RIYADA . and will be very satisfied with it , and very happy to have it .

Heis getting the ministry of the displaced... It is still have 6 mont
Hs of work or a year at the most then he will beh doing nothing afterwards. At least he had that ministry before and the outstanding files are in his constituency ...