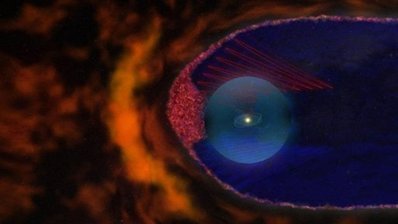 A pair of NASA probes wandering in deep space discovered that the outer edge of the solar system contains curious magnetic bubbles and is not smooth as previously thought, astronomers said Thursday.

The NASA Voyager twin spacecraft, which launched in 1977, are currently exploring the furthest outlays of the heliosphere, where solar wind is slowed and warped by pressure from other forces in the galaxy, the U.S. space agency said.

"Because the sun spins, its magnetic field becomes twisted and wrinkled, a bit like a ballerina's skirt," said astronomer Merav Opher of Boston University.

"Far, far away from the sun, where the Voyagers are, the folds of the skirt bunch up."

The Voyagers are almost 10 billion miles (16 billion kilometers) from Earth in a little known boundary region where solar wind and magnetic field are influenced by "material expelled from other stars in our corner of the Milky Way galaxy," NASA said.

This "turbulent sea of magnetic bubbles" occurs when parts of the Sun's distant magnetic field break up and reorganize under pressure.

The bubbles are giant -- about 100 million miles wide (160 million kilometers) -- meaning the Voyager probes could take multiple weeks to cross a single one of them.

But images of a smooth outer heliosheath have now been discarded as scientists begin to realize that the region is actually bubbly and "frothy."

"The actual bubbles appear to be self-contained and substantially disconnected from the broader solar magnetic field."

The findings were made using a new computer model to analyze data from the Voyager craft, and are published in the June 9 edition of the Astrophysical Journal.

"The magnetic bubbles appear to be our first line of defense against cosmic rays," said Opher. "We haven't figured out yet if this is a good thing or not."