Asir, Rafehi to Send Fighters for 'Jihad' in Syria's Qusayr 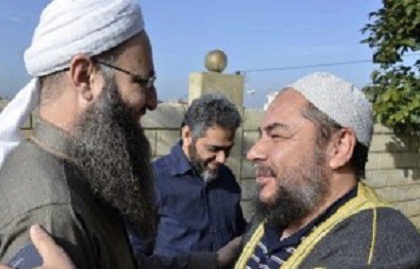 Islamist cleric Sheikh Ahmed al-Asir, the imam of Sidon's Bilal bin Rabah Mosque, on Monday announced the creation of the “Free Resistance Brigades,” urging whoever is capable of heading to Syria to go there to aid “the oppressed” in Qusayr and Homs.

Asir called on “all the Lebanese who fear attacks by Iran's party (Hizbullah) in Lebanon to arm themselves and form 5-member secret cells in order to be ready to exclusively defend themselves and their families should the need arise.”

He also called for fundraising in order to finance jihadist fighters seeking to enter Syria “to support our people.”

Meanwhile, Salafist cleric Sheikh Salem al-Rafehi of Tripoli announced that he has decided to “send men and weapons in support of our Sunni brothers in Qusayr.”

He called on "all Sunni men to be fully prepared ahead of sending the first batch (of fighters) to perform the jihadist duty in Qusayr.”

Over the weekend, Syrian regime forces retook control of a string of strategic villages in the region, which is along the border with Lebanon.

That raised fears among rebels that the town of Qusayr itself, a stronghold of the uprising, could fall into government hands.

The Observatory said fighting was raging Monday morning between rebels and Hizbullah fighters around several other villages in the area, leaving two rebels dead.

M14 will Condemn this. They are true to form unlike your sellout general who's movement is part of a delegation that is currently meeting assad.

stop your whining. We all know who is double faced and who is not. You’re only fooling yourself if you think anyone will buy that kind of BS.

Karim etc that cannot be justified and should be strongly condemned. The difference between m8 and m14 is that m8 have double standards.

Karim etc the fact is that m14 has condemned all involvements in Syria whether they come from pro or against the regime. The fact is that m8 has not condemned HA involvement but is justifying it. The fact is m8 existentially depends on the survival of the Assad tyrannic regime whereas m14 existentially depends on the notion of Lebanon as an independate state and peaceful coexistence of its various religious communities.

@FlameThrower Don't you have anything better to do with your day than troll around comment sections? Do you even know what "libtard" means?

stupid move to say the least! dragging us into syria's war is not a good move for any Lebanese citizen. Just because HA is dumb enough to do it does not mean everyone else should follow suite. I hope all officials condem this move in both words and action.

I agree with you on HA. They need to be disarmed in order for a state called lebanon to truly exist. Don't get me wrong, in no way am i excusing HA. They have been involved since day one. I just cannot condone this stupid behavior just because HA did it. I am sick and tired of fighting everyone else's war. when are we ever going to learn to stop killing each other for the sake of foreign countries? when?

I see you restricted your comments to a specific group rather than calling out everyone involved. If you can't be objective and hold everyone accountable then you are part of the problem and not the solution.

What happened when sanioura government tried to stop HA having its telecommunication network? It's has been impossible for the Lebanese government led by m14 to do anything about HA arms and influence. The fact is that HA is strongly supported by two tyrant regimes those of Syria and Iran.
The war in Syria in my opinion is an opportunity of weakening HA by having it involved in the fighting and suffering heavy losses.

hezbis and asir are real chilldren.... and they think they are intelligent? lol! pityful like their sheep followers....

I don't see how the battle ground can remain in syria if both sides start sending jihadists to syria. Horrible, horrible move. No Lebanese should be fighting in Syria.

it is sad but everything these 2 sunni clerics have said is true, thanks to hizib el laat! either no one is allowed to carry weapons or everyone is allowed! either the rule of law applies to everyone, or to no one at all! this national dialogue is nothing but a joke and a waste of time as hizbullah gets stronger and more arrogant! the prime minister and the president must do their job or go home!

This is exactly what has stemmed since the rise of the Islamic revolution in Iran. Iran has been supporting Shia communities in Arab countries against the Sunni creating strife between the two communities and gaining regional influence.

I voted down your remarks, hope it did not hurt your "sensitive" feelings:)

its exactly what lebanon needs. a new nassrallah urging people to fight in a country who raped lebanon. a new leader who urges people to hate.
this is supposed to be a muslim sheik, the religion of peace and love!

religious extremism has nothing to do with religion but everything with politics and power... that is one of the common points between hezbis and asiris!

Will today's date be refered to as the official beginning of the Second Lebanese Civil War?

I hope he goes on bicycle this way he will arrive just on time.

But whether we like it or not, a..holes like them will mushroom from both sides because they are the product of the difficult and miserable times the country has been facing. These a..holes pretend to be holymen (a title given to them by ignorant people and corrupt politicians), and, at the same tile it is O.K. under the color of "their personal Islam" to kill Arabs/Muslims with no loyalty to their country. These a..holes deserve to live the deserts under the urine of camels and sands of hell. Not Lebanon.

Excellent point. Yet you upset someone for saying the truth.

those hezbi lovers shouldn t criticize asir as they accept a shia extremist military party they should accept a sunni one! it is called logic and fairness.
if they are against asir then they should ALSO be against hezbis. there is no difference between them whatever they pretend...
i am logic: i am against both... but accepting hezbis could only lead to this kind a party a day or another, it is mathematical.

Syria can't get much worse and if gets the out of Lebanon then Go For It! The only precondition should be that Asir needs to lead them.

Ft the orthodox voting project may represent rightfully the communities as you say. However it is a retreat of democracy and of coexistence amount the religious communities. A retreat of democracy as if a Sunni wants to elect a Christian or a Shiite mp that will not be possible any more. A retreat of religious coexistence .... That needs no explanation. I agree with you that we need to find an appropriate law. However no agreement so far as each party is not looking at the law that insures the best representativity but the law that will insure each party to win the elections.

We will clean our sunna lands from the satanic takfiri Shia Broders of Yahud!!!!
The mujahidin will kill them all. like YAHUD killed in the HLOCUST!!!!!!!!!!!
Hahahaha!!!! Nusairi, rafidah and yahud!!! We are coming ti cut your heads!!!!!! Dawlat Al iraq wal sham is coming to you........

you sound like a jew that only knows 70% about islam .
yo0u get caught out if your not carefull.
we know 100% so we can see your slip ups.
now go headbutt a wall.

Eye for eye tooth for tooth, these Hizb terrorists have lost their wine leave cover and will be treated in kind. and are bear naked for everyone to see. Foul play breeds foul play. Khaddam said it yesterday , they are controlling administratively the whole country.At gunpoint. And anything to do with constitutional rule, law, has been retailored to measure accordingly. Add to that political serial murders, terrorism all over the planet from Argentina, to Bulgaria to Thailand....This is what they are: a bunch of outlaws, pure scam that will pay a heavy price some day, with their paymaster Iran....Soon I hope !

good news, let this idiot and his followers go get killed and syria; meanwhile, let hassann nasrallah, idiot no. 2 send his followers as well. may they both rip each others eyes, finger nails, and ears off until every idiot is gone. what a wonderful lebanon that will be!
takbeer!

So we have a group 'going to jihad' and another group performing 'jihadist duties'--may they both kill each other off and rid this country of these types of people.

100% trash. I will soon expose this link in the local media. You guys promote sedition and indecency. It speaks for your frame of mind.

those two guys do not look Lebanese.Lebanese people did not look like that 30 years ago when I left.Is this what lebbanese look like today?
looking foeward to comming back soon.....,not.