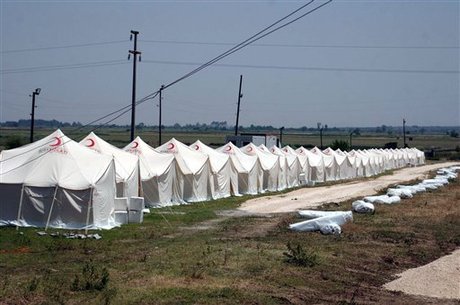 Around 4,300 Syrians who fled a brutal crackdown against pro-democracy protesters are staying in camps in southern Turkey, the Anatolie news agency reported Saturday.

Hundreds have fled in the last 24 hours, the agency said citing local sources.

Most came from Jisr al-Shugur, a city in northwestern Syria roughly 40 kilometers from the Turkish border that is the latest flashpoint in the anti-regime uprising and where Syrian state security have conducted a long-feared assault.

On Friday, Syrian television said the army was forced to intervene because "armed groups" had allegedly committed atrocities in the city.

After crossing the border, the Syrian refugees are escorted by Turkish police either to area hospitals or to one of three makeshift tent villages in Yayladagi, in Turkey's Hatay province.

Some 60 people have been hospitalized so far, the news agency said.

The Turkish Red Crescent has started building more camps to the northeast of Yayladagi, in Altinozu and Boynuyogun, capable of holding 4,000 and 5,000 people respectively, in anticipation of more refugees to come as the conflict in Syria continues.

Turkish foreign ministry official Halit Cevik declined to estimate the number of Syrian refugees that may cross the border in the coming days.

"Turkey has made every effort to welcome the Syrian refugees," Cevik told journalists after touring the camps.

He also called the crackdown in Jisr al-Shugur "unacceptable," according to an Anatolia report.