Arslan: From Now on, We're All Concerned with Defending Syria 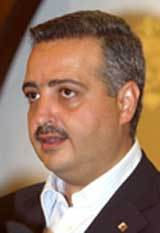 "Once again Israel has exploited the Arab slumber like it did in 1967 in order to strike the heart of Arabism, the symbol of its resistance and the fortress of confronting colonial schemes,” Arslan said in a press release.

"The West -- which has been crippled by the Russian-Chinese stance on direct intervention in Syria -- is today seeking new channels to fight its direct battle against the Syrian people, and Israel is the perfect candidate for this historic mission, because it is not concerned with respecting international laws and treaties," Arslan added, noting that "there is no difference between Israel and anyone who contributes to fragmenting the Arab nation and its countries."

And as he voiced regret about "the Arab silence over what's happening in Syria," Arslan asked: "How can they remain silent over the bombardment of Syria as they criticize the honorable men of our nation who are defending it and preserving its independence and territorial integrity?"

“Starting today, no one must be blamed for deciding to protect Syria. From now on, the Syrian people are not alone concerned with defending it, but rather all of us,” Arslan added.

“Like we scrambled in the beginning of the 20th century to defend Syria in Maysaloun, al-Mazraa and Jabal al-Arab, we will defend it in any battle, as long as the issue has gone beyond the Syrian domestic affairs towards an Israeli aggression whose features and objectives are clear,” Arslan went on to say.

maybe, just maybe, these m8 guys expect they can rally people with this fake rhetoric of Israeli aggression?
they are in for a surprise! they seem not to realize how much people have had enough of hizbushaitan and this Syrian regime, and whoever gets us rid of them is welcome.
no one will support hizbushaitan this time round, and we will be waiting for them.....

"Anyone who doesn't think it's a good idea to antagonize one the most powerful armed forces in the region is a coward."
Why is Iran/Syria sending weapons to the Hizb? The answer is Hizbullah is willing to risk the security of all Lebanese in order to ease the pressure on Master Assad. Shameful. Despicable. Typical.

the_roar, you are correct in this denunciation, even though I do not agree with your position towards hizbullah and Syria. Lebanon's borders are constantly violated, and the central government, since the birth of it's existence has failed to make a real issue out of it. But before I agree with you completely, we have been violated by Syria just as much if not more, and it's unfair to give Israel all the blame. Both actors became prevalent and involved in the country, and both are responsible for Lebanese deaths. The only difference however, is how much power Syria managed to maintain over us when Israel was effectively denounced as the enemy.

The massacres of civilians in banias did not happen either

what did syria do to defend lebanon in 2006? lol what a hypocrit , afraid of losing his beloved regime....

absent just because of the great internet connection we have in lebanon... some say it has greatly immproved! lol....

When and if Israel finish off the Palestinians ( Christians and Muslims) , then the Muslims around the world, they will go after us the Christians, but for now they need us to help them finish the first job.

Enough, he's in good position to know about such practices although I think he gave up playing this childish game.

Would you claim that Hizbullah's hit which escalated towards the 2006 war was suicide? and if not, why?

What a joke. The weapons destined for Hezbollah would have destabilized Lebanon and its sovereignty. You should thank Israel for this bombing and sit back in your chair.

What Arab nation? Because of people like you the citizens of Lebanon will continue living in a middle-age quality of life and be brainwashed by religious fanatics.

From now on I wish Porcelain would stay at home, light up his hubbly bubbly and have another affair with his driver!

Incredible. The regime is committing daily massacres against its people sending missiles and bombs from airplanes on civilians. Yet mr Arslan has nothing to say about it. Only when Israelis are bombing arm depots or arm transfer. Is Arab nationalism that blind?

correctly FT...in your demented head only.

Flamer defends the shia at all costs, if a shia man were to rape a child then behead the child, flamer will someone invent some shia taqqiya lie & blame the child