U.N. Expects Cabinet to be Fully Committed to 1701, Other International Obligations 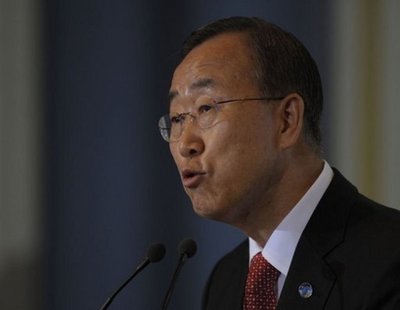 U.N. chief Ban Ki-moon welcomed the formation of the new Lebanese cabinet expressing hope that it will be able to address the economic, political and security challenges facing the country.

“The Secretary-General believes that the formation today of a new cabinet in Lebanon, following months of consultations … is an important step toward establishing a functional, executive government in Lebanon,” said a statement issued by his spokesperson on Monday.

The statement said that Ban looks forward to the finalization, as soon as possible, of the cabinet’s policy statement. He expects it to reiterate its commitment to the full implementation of Security Council resolution 1701 and to all of Lebanon’s international obligations.

He said the government will “enable the country to address the manifold challenges facing the country, whether economic, political or security.”

“There is much to be done in the coming months. I wish Premier Miqati and his new government success in their endeavors,” he added.