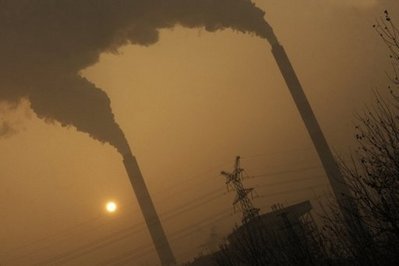 Sharply reducing emissions of soot and smog could play a critical role in preventing Earth from overheating, according to a U.N. report released on Tuesday.

Curbing these pollutants could also boost global food output and save millions of lives lost to heart and lung disease, said the report from the U.N. Environment Program (UNEP) and the World Meteorological Organisation (WMO).

Even as climate talks remain deadlocked on how to share out the task of cutting CO2, parallel action on "black carbon" particles and ground-level ozone would buy precious time in the quest to limit global temperature rise to 2.0 degrees Celsius (3.6 degrees Fahrenheit), it said.

Record output in 2010 of carbon from energy use and unprecedented CO2 levels in the atmosphere suggest that efforts to maintain the 2.0 C cap, widely seen as a threshold for dangerous warming, may already be doomed, say scientists.

But quickly tackling black carbon and smog-related ozone could slash 0.5 C (0.9 F) off the temperature increase projected for 2030, putting the two-degree target back on track, the new findings suggest.

"There are clear and concrete measures that can be undertaken to help protect the global climate in the short and medium term," said Drew Shindell, a researcher at NASA's Goddard Institute for Space Studies and one of the 50 scientists behind the new assessment.

"The win-win here for limiting climate change and improving air quality is self-evident and the ways to achieve it have become far clearer."

The report was unveiled in Bonn as delegates from more than 190 nations under the U.N. Framework Convention on Climate Change (UNFCCC) struggle to make headway in the deeply stymied negotiations.

Black carbon, found in soot, is a byproduct of incomplete burning of fossil fuels, wood and biomass, such as animal waste. The most common sources are car and truck emissions, primitive cook stoves, forest fires and industry.

Soot suspended in the air accelerates global warming by absorbing sunlight. When it covers snow and ice, white surfaces that normally reflect the Sun's radiative force back into space soak up heat instead, speeding up the melting of mountain glaciers, ice sheets, and the Arctic ice cap.

The tiny particles have also been linked to premature death from heart disease and lung cancer.

Ground-level, or tropospheric, ozone -- a major ingredient of urban smog -- is both a powerful greenhouse gas and a noxious air pollutant. It is formed from other gases including methane, itself a potent driver of global warming.

A threefold increase in concentrations in the northern hemisphere over the last century has made it the third most important greenhouse gas.

Unlike carbon dioxide, which lingers in the atmosphere for centuries once emitted, black carbon and ozone disappear quickly when emissions taper off.

"The science of short-lived climate forcers has evolved to a level of maturity that now requires ... a robust policy response by nations," said Achim Steiner, Executive Director of UNEP.

Measures recommended for reducing black carbon include mandatory use of diesel filters on vehicles, phasing out wood-burning stoves in rich countries, use of clean-burning biomass stoves for cooking and heating in developing nations, and a ban on the open burning of agricultural waste.

For ozone, the report calls for policies that curb organic waste, require water treatment facilities to recover gas, reduce methane emissions from coal and oil industries, and promote anaerobic digestion of manure from cattle and pigs, both major sources of methane.

The report estimates that nearly 2.5 million deaths from outdoor pollution, mainly in Africa and Asia, could be avoided every year by 2030 if black carbon levels dropped significantly.