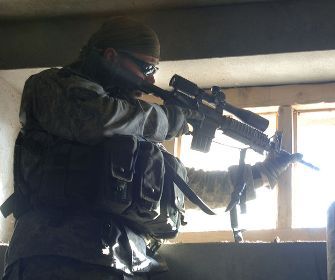 A man who identified himself as a Lieutenant Colonel in the Syrian army has told Agence France Presse that he had seen “Iranian and Hizbullah snipers” in the Damascus suburb of Saqba.

"I remember well in Damascus, in the Saqba district, I saw people demonstrating” and “with my own eyes I saw snipers positioned on upper floors, Iranian and Hizbullah snipers who fired on the crowd," Hussein Harmoush told AFP, when asked about the presence of Iranian soldiers or Hizbullah warriors fighting alongside the Syrian army, as recently reported by many witnesses.

Now wearing civilian clothes but displaying his military ID card, the lieutenant colonel said he took advantage of a furlough to flee Damascus on Thursday towards the Turkish village of Guvecci near the border with Syria, where his family is sheltering.

He said he defected because of "attacks on innocent civilians, carrying nothing in their hands except an olive branch" -- rejecting any notion of an armed uprising.

On Friday, Hizbullah strongly denied media reports accusing the Shiite party of being involved in the ongoing clashes in Syria, describing them as “rumors aimed at inciting sectarian tensions.”

“Lately, some Arab and Israeli media outlets and a number of websites have been circulating rumors accusing Hizbullah of being involved in the military confrontations taking place in some Syrian regions,” said Hizbullah in a statement.

Those media outlets, according to the statement, have also reported that Hizbullah members were killed in clashes between Syrian security forces and protesters.

It said the aforementioned media reports were “part of the same conspiracy targeting Syria and the resistance movements” in the region.

Harmoush said he had no doubt that in all the places he was sent the protesters were totally unarmed.

"The army received the order to prevent demonstrations at all costs and to silence the people. They ordered us to open fire on people if the protests continued," he said.

"I did not accept the orders. But I saw what some soldiers did. I saw tanks fire on cities, I saw artillery being fired, helicopters firing with automatic weapons."

"The Syrian army is killing civilians, chasing people out of their homes. ... Villages are emptied, the inhabitants chased to the border and to other countries," he said.

Harmoush hopes he can persuade other officers to follow his example.

"Some people have come into contact with me, and God willing they will desert," he said.

The decision is not easy, however, because of the fear of reprisals. "Many officers and soldiers want to defect but they don't because they are afraid of being killed -- them and their families," Harmoush said.

He added that an intelligence agent's wife was raped after he refused to kill civilians.

This tale is not written in books, they are real experience, the new cabinet is the moral obligation to avoid that similar chapter appears in Lebanon, under any supposed reason, LEBANESE CAN NOT ACCEPT INOCENT KILLED FROM THE CEILING BY SNIPERS, INDEPENDANT HIS ORIGEN OR PARTY

how did he know they were iranians or Hizbullah?

yes yes and he also saw santa, who was providing air cover for the snipers on the ground and then a wave of rain dear suicide bombers got deployed.

i wonder how much he got paid for the story prob a few hundred, they come cheap these days competition is high.

Shame on you Naharnet for posting garbage. that is why things are what they are.

actually, amal is the real puppet of the syrian regime, not hezballah, in fact during may 7th, all the za3rani came from the amal zi3ren, such as firing left and right, smashing cars, windows etc so next time someone wants to come up with such a lie, they should at least get their facts straight. Amal is the real baathist militia in lebanon so if the syrian regime would need help then they would use amal, not hezballah who are trained in guerilla fighting against the zionist soldiers and wouldnt have anything to offer the syrian regime. and with what would they even need help? in firing unarmed protestors and killing civilians? they dont need help with that, the syrian army dont even dare to throw a stone at occupied golan but when it comes to killing their own people then they are experts. The syrian army is not even trained in discipline, their only skill is to shoot everyone who isent a baathist.

sweet this is the type of news i love to hear.....the path to 100 years of civil war in Syria is upon us for all there crimes they did to lebanon.Thank you

oh yes, right . the Syrian arab army does not have any of their own snipers. They really need those of Hizballah. Please, this is taking it too far.

It'a easier for outsiders to murder civilians. Like when th Iranians where brought in May 2008

Moaten, check with the Druze. several Iranians where found among the invading killers from the filthy non-Islamic militia whom attacked Beirut and later were ambushed in the mountains. Only Martians we know of is the Mehdi guy in the sky you believe will rescue you.