Britain, France to Drum Up Support to Arm Syrian Rebels 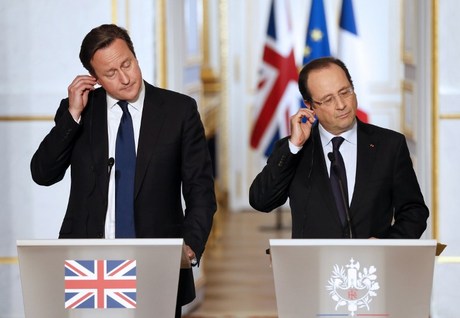 "We are prepared to lift the arms embargo further so that the opposition can present themselves as the legitimate voice of the Syrian people," Cameron told reporters during a brief stopover in Paris on the way back from Brussels.

Hollande said the proposal to lift the embargo would "have very precise conditions which are to eventually provide arms only once we know whom they are intended for and their use."

He said the regime forces "have arms while the opposition does not and there is effectively an imbalance."

The French leader added: "We want to bring the Europeans to this line of thought" during a meeting on Monday in Brussels of European foreign ministers.

European Union sanctions against Syria are up for renewal at the end of the month, with France and Britain pushing for a lifting of the arms embargo so the rebels can receive weapons.

The United States and Russia, which back opposite sides in the conflict, earlier this month proposed a peace conference dubbed Geneva 2 to bring together rebels and representatives of President Bashar Assad's regime.

The Syrian Observatory for Human Rights says more than 90,000 people have been killed in the conflict in Syria since it began in March 2011.