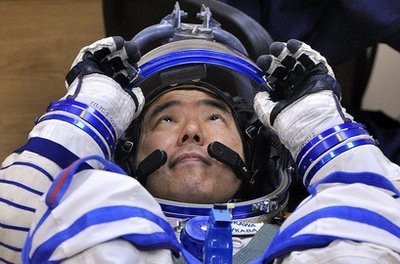 Japanese astronaut Satoshi Furukawa has tweeted from the International Space Station that he suffers from travel sickness in space.

"Space motion sickness got me. Especially when I move my head suddenly, I really feel sick. My head feels heavy. Help!" Furukawa, who is also a medical doctor, said in a message posted on his Twitter account (twitter.com@Astro_Satoshi) Tuesday.

Furukawa arrived at the International Space Station last week along with American Mike Fossum and Russian Sergei Volkov after travelling on a Russian-made Soyuz spacecraft.

The three are due to spend the next six months on the station conducting experiments.

In a later tweet, Furukawa played down his space sickness.

"From MD point of view. No problem. About 2/3 of first flyers experience transient space motion sickness," he wrote.

"It is considered a brain's adaptation to weightlessness."

"Your head feels heavy due to fluid shift. No problem since the symptom is transient," he said in a further tweet.

In an interview last month posted on the Japan Aerospace Exploration Agency (JAXA) website, Furukawa said he was interested to see how the body changes in space.

"Personally, as a gastro-intestinal surgeon, I'm very interested in seeing how having a full stomach would feel in space. I hope to report back first-hand about the differences in the way my body feels in space and on the ground," he said.

"In addition, if my fellow astronauts should happen to get sick or injured, I can examine them and manage the situation in cooperation with doctors on the ground."