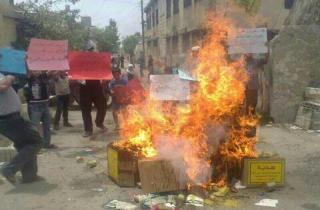 A number of Palestinian refugees who fled the war in Syria on Thursday set ablaze aid offered to them by Hizbullah in protest at the party's military intervention in the neighboring country, state-run-National News Agency reported.

The refugees at the Palestinian Ain el-Hilweh camp in Sidon called on Hizbullah to withdraw its fighters from Syria and not to interfere in Syrian affairs, NNA said.

The military support of Hizbullah has helped Syrian regime forces gain the upper hand in the battle for control of Qusayr, a key town for both the regime and the insurgents, where a fierce army assault began 12 days ago.

But the offensive on the mostly-Sunni town of Qusayr forced the movement to change its argument.

"Syria is the rear guard of the resistance (Hizbullah's fight with Israel), its backbone, and the resistance cannot stay with its arms folded when its rear guard is exposed," Nasrallah said on Saturday in a speech for the 13th anniversary of Israel's withdrawal from Lebanon.

Nasrallah stressed that Hizbullah will win the battle against the “United States, Israel and the Takfiris just like it emerged victorious in previous wars.”

Hundreds of Palestinian refugees have fled to Lebanon after fierce clashes at the Yarmouk refugee camp in Damascus.

A typical biggot. No doubt, an Aoun supporter.

Ironic - to accuse the palestinians if selling their cause for a penny because they refuse "a penny"-worth of aid from those fighting in support of a regime that brutalized them.

Guys, the war wehave been waiting for, i.e. the annihilation of hizbushaitan is coming extra fast apparently, and so many players (including countries) will be involved directly in this operation.
be on your guard.....

HA are terrorists. New excuse for their selfish actions everyday.

Suckleen are honourable hard working people. Shame on you for talking like this.

The truth is the truth. Pay a visit to the butcher Yassir Arafat's widow living luxuriously in Southern France.

She comes from a very rich family before she married Arafat

palestinians elected hamas to take care of their future and defend them not hezbollah.

may be and may be not.

To bad it wasn't a load of chemical weapons

The Palestinians. Including Hamas are now against Syria and HA. Hang on to your seats boys and girls. This is going to spiral out of control.

Hizb what? they are nothing but terrorist militia that has no reason to have arms. Any Shiite that speaks against them is an Israeli spy, and if it was a politician they assassinate him or her. And now under the orders of Iran they are massacring Syrians.

LOL...so no more predictions of bashar's demise...aye...no just talk crap about the only armed force in middle east that does not crawl for anyone...yalla...sab3a ayar is gona repeat itself soon...

Here's what you do, nuke them all and start over. Just a big thermonuclear squeegee across Lebanon and Syria.

No worries, now that the Palestinians have turned against the Axis, the Glorious Iranian Resistance is migrating to a new cause the liberation of the Golan and the protection of their exposed rear end, Assad jr.