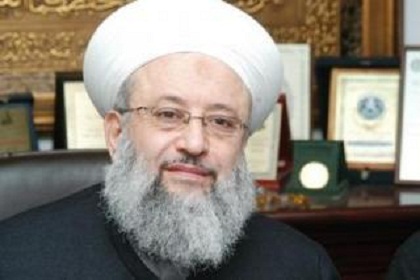 The Imam of Quds mosque in the southern city of Sidon said Monday that assailants opened fire on him while he was heading for prayers but he escaped unscathed.

Sheikh Maher Hammoud told Voice of Lebanon radio (100.5) that the assailants fired around 20 rounds from a passing vehicle after he went out of his house in Quds square to head for prayers.

Hammoud hinted that “sympathizers with the Syrian opposition or any party seeking to ignite strife could be behind” the assassination attempt.

Hammoud is close to Hizbullah which has sent fighters to Syria to support the regime of President Bashar Assad against rebels seeking to topple him.

The state-run National News Agency said the security forces found in Sidon a Toyota which initial investigation said was used in the attack on the Sheikh.

The army intelligence also managed to question its owner but it turned out that he had reported it stolen on Sunday, NNA said.

In a similar incident, assailants opened fire on the vehicle of Islamic Unity Mosque's Imam, Sheikh Ibrahim al-Braidi, in the Bekaa town of Qob Elias at dawn Monday.

The GMC Envoy, which was parked near his house, was partly burned.

Al-Braidi has close ties with Hammoud.

May Allah protect Sheikh Maher and all the proud people of lebanon from wahabi Nusra thugs.

Allah is not going to protect such people.You have to know Allah first .

MOOOwate and flamer this is likely the work of Michel Smaha's allies.

Bani, the best avatar you had was the one with the rat, it was fantastic.

Hehehe. This New is funny, but the sewers rat beats all of them ;-)

Why is it, that in our beloved country, religious leaders have to be politicians too?? Sheikhs, priests, clerics, cardinals...whatever you are do what you are suppose to do and teach people love, peace and generosity...we have enough hatred in Lebanon already and we have enough lying and racist politicians too, people come to you to pray and not to talk politics!

Because in our country, people are religious. When you are religious, you listen and follow most of what your priest or sheikh says.
Not sure why you seem surprised.

People expect sheikhs to have a political opinion, just like they expect a politician's son to succeed him. Did you think you live in Switzerland?? LOL

The people are religious, very sectarian and somewhat tribal, it's only normal for them to elect politicians that are the same, like them.

thank you jallour for pointing out the flaws of our country...

I was just pointing out that religious leaders and politicians are a product of the people.

I am not against religion, but the fact is that religion hinders progress, freethinking and building a civil and just society, and history proves this. The west would have never progressed had the people not curtailed the church's role in politics, but that only happened when the people were ready for that. We, as people I mean, are not ready for that in Lebanon.

Better Luck Next Time! Religion means u follow God! not some bearded idiots with robes of all confessions!

I dont ache when a religious man or cleric is killed! now seriously!
They send people to die everyday in the name of GOD so may be they should die first setting the good example!

who said he was doing anything other than going to pray at the mosque? Obviously he was targeted to cause sectarian strife.

This is not good. While I disagree with the Sheikh who condones the killing of Syrian innocent people at the hands of Hezb el Devil, we don't judge people on words or intentions. Only God can do that. Hezbolshaiitan is inviting those fanatics to come into Lebanon and then they cry foul.

Anyone meddling with politics seems to be a target to assassinations, although so far, it has been only m14 politicians who were the target.
this attempt does not make sense.... unless someone (i.e. hizbushaitan) wants to create more strife.

Yes just like gagea bent over to pick up a flower???