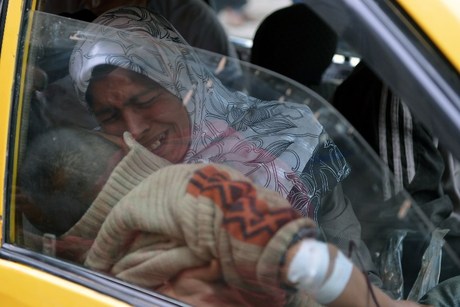 Islamist rebels fighting the Syrian regime shot dead a 15-year-old child in front of his parents and siblings Sunday after accusing him of blasphemy, a monitoring group said.

"An unidentified Islamist rebel group shot dead a 15-year-old child who worked as a coffee seller in (the northern city of Aleppo), after they accused him of blasphemy," said Syrian Observatory for Human Rights director Rami Abdel Rahman.

"They shot the boy twice -- once in the mouth, another in his neck -- in front of his mother, his father and his siblings," he added.

The Observatory condemned the execution as "criminal and a gift to the regime of Syrian President Bashar Assad.

"This kind of criminality is exactly what makes people in Syria fear the fall of the regime," Abdel Rahman said.

The Britain-based monitoring group, which relies on a broad network of activists, doctors and lawyers in Syria for its reports, demanded the killers' arrest.

"We are working on identifying their names," said Abdel Rahman.

Large swathes of Aleppo city have since last year fallen into rebel hands.

Activists have frequently lashed out against rebel groups which have taken advantage of the security vacuum in Aleppo to commit rights abuses.

Update:
This story is not correct.
I believe it was based on a false report that has been discarded.

Why do you say the story is incorrect?

i bet you that assad is paying those ruthless and inhuman islamists just to divide the opposition and the syrian people... given the past of the baath regime every thing is possible to stay in power, other dictators already did that!

Of course, the rebels wouldn't hurt a fly.

And the bearded foreign types are friendly, open-minded, democracy seeking rebels who wouldn't hurt anyone?

and assad would never hurt his people nor bomb them....

Assad was not in the business of killing his people this is the were of outside Sunni interlopers! The blood should be on the hands of Saudi and Qatar monarchy. Don't believe the bull shit the western media feeds its dumbed up citizens.

This is the exact reason why these extremist terrorists should not prevail in this fight. There way of life and believes are violent, they live by the sword and will always try to enforce with the sword over the people that disagree with their views. How many more heinous acts do we need to be witness to before we declare FSA a terrorist organization? Eating the organs of the dead, rapping, looting, killing and kidnapping religious figures and killing innocent kids shouldn't be excepted in our society.

i think these islamists were hired by assad to justify the need to his criminal republic.

just think of it: who released elabsi before nahr elbared and let him come to lebanon? hariri? LOL... where did he escaped after nahr elbared? KSA? LOL... assad has been using and harbouring islamists terrorists groups for decades to use them... can M8ers deny this fact? LOL

100%. HA had a red line against the leb army against attacking nahr el bared.
Fath el islam was sponsored by syria to weaken lebanon. Now they are fighting assad...

islamists are just a tool. Islamists are mercenaries who are thrown here and there to assist various causes. (baathist, farsi, wahabi, zionist.) These islamists have no popular base.

Peace, you are indeed correct. Assad is an expert at installing fake islamists to do dirty work. He learned from the US government yet pretends he is resisting them. Every drug dealing thug can be hired these days to be "an islamist" in order to destroy peoples legitimate resistence. We saw the same scenario in iraq.

Exactly. The install fake islamists who do such things to tarnish the opposition and scare people in to supporting the ruthless regime.

Please stop twisting Nasrallah's words.
Research his speech or youtube online, he said: Civilians in nahr-el bared are a red line. As a politician he was balancing his stance not to give the impression as he was supporting the army against the sunni islamist (i.e. sunni versus shiite)..
As such, the army gave citizens a week to evacuate before they attacked them. Please analyze his full speech where he says civilians are red line and his support to the army on the other side.

Do you recall sometimes way before 2005 when the army battled the Islamists in Jroud Akkar? That was before the Syrian left Lebanon.
Can someone find the year where the Maghawaeer fought them in the mountains where they were hidding..?

This is all over the news in North America, Australia and EU. Bad news for the rebels. Day after day, simple Canadian are pulling their support of the rebels so does the government.Recently, french foreign minister acknowledged those events.

Support to the opposition by these countries will no longer translates into financial and military support except for the moral support. Turkish people don't wanna have anything to do with the Islamist. The Amercians will ask Qatar and KSA to stop supporting the rebels giving the regime the upper hand to finish them with the support of the syrian people fearing the Islamist. Poor the syrian people:(

I was in hama in 82. Get rid of Islam and there will be peace

nothing can b said...they gave weapons and power to people who deserve nothing ...and this is what happens ..i cant even find the words to express this article ..and the supporters of this kind of people..may his soul rest in peace ..and inshalla the day will come when who shot him will have the same end

give islam a nuuk in the face!!!!! you know tested in japan used in bagdad!!

some men think they are GOD and see others as sinner-slaves and decide of their lives and deaths!?! amazing arrogance and pretence!

One of these days you idiots are going to wake up and realize its Islam not individuals in it.

I don't know,does US build 'democracy' in Syria with these bandits?

If this story is true, then this criminal act hurts the FSA image more than anything else...rogue elements should be eliminated from the FSA...God bless Lebanon and a free and democratic Syria...