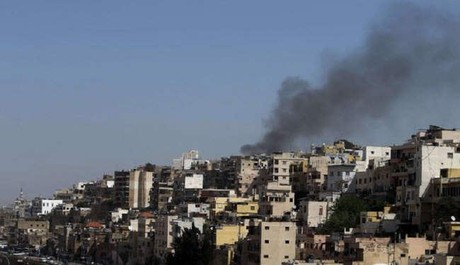 “Four rockets fired from the Syrian side of the border hit the outskirts of the town of Sirein, east of Baalbek,” state-run National News Agency reported.

“The sounds of explosions were heard in the vicinity of the towns of Hawrtaala, Brital and al-Khodr in the Bekaa,” it added.

“A rocket fired from the eastern Lebanese-Syrian border hit the town of Riyaq,” OTV reported, as al-Jadeed television said the rocket caused no casualties.

OTV said fierce clashes erupted between Hizbullah fighters and the jihadist al-Nusra Front in the barren mountains of Maaraboun and Ham in northern Bekaa as rockets were falling on the Lebanese region.

MTV also reported “fierce clashes” between the rebel Free Syrian Army and Hizbullah on the eastern mountain range “opposite the towns of al-Nabi Sheet and al-Khodr.”

It later said Hizbullah managed to seize control of the outskirts of the town of Ham in Damascus province, "which is considered an FSA stronghold."

MTV also reported that three more rockets hit the town of al-Khodr “amid the sounds of explosions in the area.”

Hizballa initiate the new civil war of Lebanon (2013~2025?).... Factions better start picking up sides because this one will Be much worse than the previous ones.

Rockets from rebels to Lebanon have increased more and more since Hezb publicly announced its participation in Syria...so much for defending Lebanon Nasrallah.

Are you new here on planet earth?

There has always been civil wars in lebanon regardless of who lived there and what their ethnicity or religion was. The first one did not start in the 70:s. To blame these civil wars on one group of people whether political, ethnic or religious is complete and utter nonsence. Hezballah should not be getting involved in syria, neither should iran, qatar and KSA. If these sides wanted to get involved then they should have gotten involved to bring peace instead of war and secterian hate. By blaming hezballah for a possible civil war in lebanon then you are only making sure that such civil wars continue to happen because you are ignoring core issues and repeating the misstakes of the last civil wars which ended without any lesson learned nor responsibility taken and instead blaming "foreigners" because thats the only way ignorants can find unity and it only lasts shortly until its time to blame someone else and never deal with the actual problem.

Both m14 and m8 have contributed to refueling civil war hatred for a long time.I wouldnt say hezballah are innocent but neither are the rest in lebanon. Likewise, in syria, who is innocent between the regime forces and their loyal militants VS FSA and their fellow militants? At this point, i refuse to be on the side of any of these. In short, dont focus on a particular side whether its hezballah, nusra, bashar, hariri, FSA because to much has happened for one side alone to be the main problem. God can turn rain in to sunshine so i trust him and i will not focus my hate on one side when they are all to blame, whether in syria or lebanon.

@haile.selassie: enough defending Hizbullah the only leb militia that lied for years about the Army-People-Militia yet it undermined and the Army, sacrificed its own people for Syria not defending Lebanese soil against Israel and proved the concept of the Iranian militia in Lebanon. It is the only reason why you have armed palestinians and now the takfiris...Try to remember who was the only leader who told the Leb Army that Nahr el Bared was a red line: Nasrallah, and as usual the Syrian's way to eliminate their opponents, HA executed the assassination of Gen Francois Al Hajj right after his victory in 2007

Our civil war started with secterianism as the wars before it. Blaming it on anything else is just silly. In 1948 when the refugees arrived, christian ones were naturalized while the muslim ones were given harassment and opression because of secterianists fearing muslims increasing in lebanon.

It was not one incident or one sect or one people that bore the responsibility, it was the secterian mindset that did. The same one existing today.

wolf: go and miaou somewhere else if you are just to insult without any substance.
iran and hizbushaitan are no better than any ther extremists.
hizbushaitan has been assassinating, raping, killing babies, ....
all extremists like you are rejected by all here on this site.

Israel has well over a million ordinary Arab citizens, so why would they need an honorary one?

Stop picking sides! M14, M8, Aoun, Hizballah, Frangieh, Hariri, Jumblat, etc. Who's on Lebanon's side. These Khutabet are only meant to divide. They are empty words to grab headlines and perpetuate the status quo. The situation in Tripoli has been deteriorating for years. Yet, politicians wouldn't deploy the army to disarm and disband thugs. Now, things are falling apart at the border and all the politicians can do is play the blame game. Lebanese politicians love the status quo because it means more income from their foreign sponsors Iran, Saudi, etc. That and the prospect of oil in the Mediterranean and no wonder why they should delay the elections.