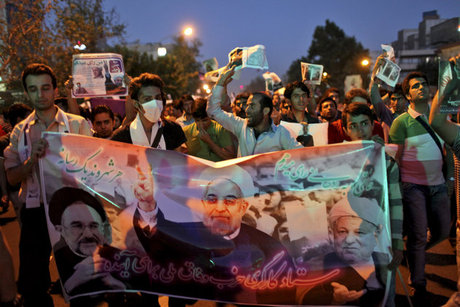 Polling stations remained open four hours longer than initially scheduled as officials reported a turnout almost as large, or bigger, than that for the controversial vote of four years ago.

Representatives of all six remaining hopefuls approved by the conservative-dominated body that vets candidates for public office urged their supporters to remain calm until the official results are known.

"We ask people not to pay attention to rumors of victory parades being organized and to avoid gathering before the official results" are announced by the interior ministry, their statement said.

Iranian media quoted the capital's top electoral official, Safar Ali Baratlou, as saying that as of 1400 GMT, "turnout (in Tehran province) is higher than four years ago. It will certainly reach 70 percent."

Officials in several other provinces reported turnout of at least 70 percent by 1330 GMT.

In 2009, when Ahmadinejad's controversial re-election sparked months of mass protests that culminated in the detention of two of his challengers, turnout reached 85 percent nationwide.

More than 50.5 million Iranians are eligible to vote for the man -- no women candidates were allowed -- to succeed Ahmadinejad, who is constitutionally barred from standing for a third term.

Supreme leader Ayatollah Ali Khamenei, who has the ultimate say in all of the most sensitive issues including nuclear policy and had called for a large turnout, voted early.

"Inshallah (God willing), the Iranian people will create a new political epic. I advise all people to vote," he said after voting.

"The hell with you" who do not agree with how the election is run, Khamenei said on national television. "The Iranian people... will do what is in their interest."

His remarks were echoed by Ayatollah Ahmad Janati, head of the Guardians Council electoral watchdog, who said voters "were poking their fingers in the eye of the enemy".

Results are expected on Saturday, but if no candidate secures more than half of the votes for an outright victory, the top two will square off in a second-round run-off on June 21.

With the conservative camp divided, reformists seem confident of a good showing by moderate cleric Hassan Rowhani, who headed Iran's nuclear negotiating team under Ahmadinejad's reformist predecessor Mohammad Khatami and has emerged as a frontrunner with a real chance of forcing a run-off, analysts say.

Both sides, reformist and conservative, urged a high turnout.

"It's a duty. I hope the next president can do something for us, and for the workers. I will vote for Qalibaf because he is a good mayor. I hope the promises he made will come true," said a 50-year-old woman, who declined to give her name.

Former president Akbar Hashemi Rafsanjani, who was disqualified from standing, urged a large turnout. Analysts say that should increase Rowhani's chances of a credible showing.

Rafsanjani, who has thrown his weight behind Rowhani, said: "We hope the election result will lead to national cohesion... since cohesion is a requirement for success against foreign and domestic dangers".

A major factor will be the number of abstentions, as many people were demoralized in 2009 when Ahmadinejad's re-election was widely claimed to be fraudulent.

That led to massive street demonstrations, which were crushed by the regime with deadly force, and the two reformist candidates -- Mir Hossein Mousavi and Mehdi Karroubi -- were put under house arrest.

Internet social networks blocked after they were used to rally protests against Ahmadinejad's re-election have urged abstentionists not to waste their votes this time.

The campaign has been dominated by Iran's controversial nuclear program and an economy devastated by harsh EU and U.S. sanctions imposed in an attempt to rein it in.

Inflation is raging at more than 30 percent, the rial has lost nearly 70 percent of its value and unemployment is rising.

Western governments and arch-foe Israel accuse Iran of seeking to develop atomic weapons under cover of its civil nuclear program, a charge it vehemently denies.

if iranians are smart, they'll know who to vote for, and what they'll get in return....

Maybe the cowardly General should run for President of Iran, he would have a better chance there :-)

the candidates have to be approved by the religious authorities to run and must run as an anti 'peace with the west' candidate. So, more or less, there is really not much choice.

as long as there is the fakih idea which is khaminei changing presidents is nothing else but folklore!

Flame, you're right, but the difference is I can stand in the middle of any American city and yell at the top of my lungs that they both suck and should go to hell. That's freedom. Try doing that in your beloved Tehran.

Seriously. I'm not trying to insult you. But think about what they would do to you in Tehran if you said that about the Mullahs.

Not in Iran. All the candidates are hand picked by the supreme leader, so no matter who wins they all toe the line of the Mullahs. Democracy at its best.