U.N. Peacekeeper Killed in Shelling of Sudan Base 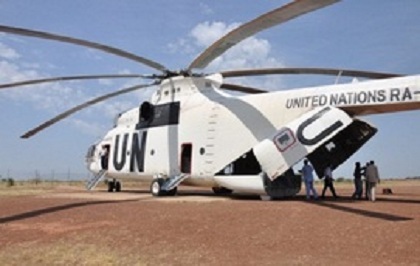 Two shells struck a U.N. logistics base in South Kordofan's main city Kadugli, U.N. peacekeeping spokesman Kieran Dwyer told Agence France Presse. Rebels have been fighting Sudanese forces in the state for the past two years and the U.N. says there is a major humanitarian crisis there.

"One United Nations peacekeeper was killed in this shelling and two more injured. We condemn in the strongest terms this shelling," Dwyer said.

The U.N. was not able to immediately say who carried out the attack. But there has been fierce fighting between rebel fighters and government forces around Kadugli in recent weeks.

The U.N. does not have access to much of South Kordofan, but it uses Kadugli as a support base for its peacekeeping mission in nearby Abyei, a territory disputed by Sudan and South Sudan.

Sudan accuses the South Sudan government of backing the South Kordofan rebels and tensions between the two sides have risen again in recent weeks.