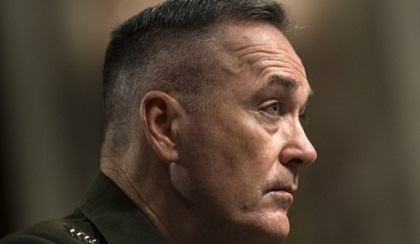 The NATO commander in Afghanistan warned Friday that gains secured in 12 years of fighting could be lost if donor nations cut back support when troops leave next year.

Billions of dollars in military and civilian aid have been promised to Afghanistan after the NATO-led combat mission ends, but many Afghans fear they will be abandoned by the war-weary international community.

U.S. General Joseph Dunford said that further investment was needed to turn the Afghan army and police into a modern fighting force that could protect its people and defend progress made since the Taliban regime was ousted in 2001.

"The gains that we have made to date are not going to be sustainable without continued international commitment," U.S. General Joseph Dunford told a group of foreign correspondents.

"We are not where we need to be yet".

"The continued presence of the international community politically, in development and in security is necessary to sustain the progress that we have made over the last few years.

"Is the effort we have had to date sustainable? I would say no, not until we develop the procedures (and) the institutions necessary to sustain a modern national army."

Dunford's comments reflected concern that Afghanistan is set for spiraling instability as 100,000 NATO-led troops withdraw and President Hamid Karzai steps down ahead of a presidential election next year that could be bitter and divisive.

"If the elections are not perceived as inclusive, free and fair, there is certainly a chance that people would not be satisfied and that could result in violence," Dunford said.