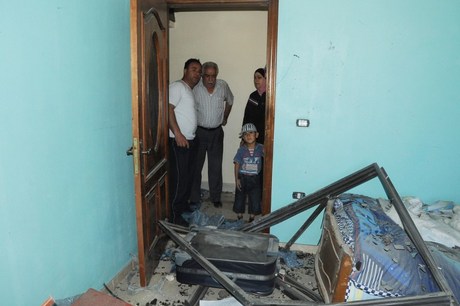 Two people were wounded on Friday as nine rockets fire from Syrian territory landed in the Bekaa city of Baalbek, shortly after Hizbullah chief Sayyed Hassan Nasrallah vowed in a speech to put an end to rocket attacks against the Baalbek-Hermel region.

“Five rockets fired from the Syrian side of the border fell on the Baalbek area of al-Kayyal,” state-run National News Agency reported.

The agency said the rockets fell in the areas of al-Kayyal, Adous intersection, al-Basatin and near the My College School, the house of Suleiman Ramadan and the house of Sheikh Hassan Shamas.

Meanwhile, the Syrian Observatory for Human Rights said Syrian rebels “fired a Grad rocket on the Shiite Aleppo town of al-Fawaa, describing the shelling as a response to Nasrallah's speech.”

In his address, Nasrallah noted that “there is a delicate situation in the Baalbek-Hermel area -- which includes the rockets that are falling on the area -- that needs special care.”

“The sensitive point is that some media outlets are circulating rumors that these rockets are being fired from Arsal and its barren mountains -- they are accusing a Sunni town of shelling Shiites towns,” he said.

“And whenever a Arsal resident is killed or attacked, some politicians directly accuse Hizbullah. Some media outlets are spreading lies and I call on everyone to verify any report. I announce that the rockets were not fired from Arsal, but rather by the armed groups inside Syrian territory and God willing we will find a solution to this issue,” Nasrallah vowed.

Basita, Nasrallah will fund the repairs with his holy money from Qom.

1 red thumb, someone disagrees that Qom's money is holy. Good to know, good to know.

Before Hezbollah officially entered the Syrian fray the only Lebanese towns getting bombarded from Syria were towns in Akkar; slogan "the Islamic Resistance in Lebanon" protecting Lebanon since 1983... sorry I couldn't do it not with a straight face.
God help the bee2a al hadinat lil mercs of the Iranian Foreign Legion from the actions of the mercs of the Iranian Foreign Legion. Will we hear yet another "if only had I known" from Hassan?

He will find a solution to any issue Iran's willing via the Iranian money same as he is reimbursing the brainwashed martyr's families...

So this will effect the car parts business in Lebanon? are we to expect less vehicle thefts becuase this area is now insecure? looool