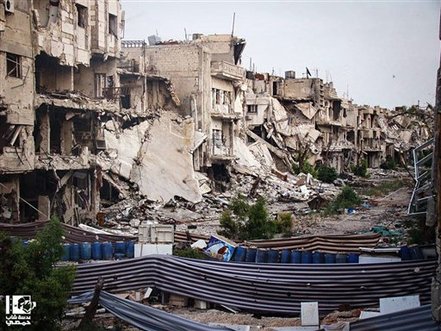 The White House on Friday all but ruled out the notion of mounting a no-fly zone in Syria, billing it as difficult, dangerous and costly, and unsuitable to halting close quarters ground battles.

A day after U.S. officials pledged to stiffen military help to Syrian rebels, likely moving towards sending some form of arms for the first time, they made it clear that swift U.S. mission creep in the country is not on the cards.

Deputy national security adviser Ben Rhodes said mounting a no-fly zone in Syria poses significant logistical and strategic challenges that are more acute than those faced by NATO and Arab League allies in Libya in 2011.

"It's dramatically more difficult and dangerous and costly in Syria, for a variety of reasons," Rhodes said.

"You do not have the same types of air defense system that exist within Syria. So in that regard, it's more difficult."

Rhodes also argued that in many cases, rebels and forces fighting with Bashar Assad's Syrian regime were "fighting in some instances block by block in cities" in a way that made targeting particular forces difficult.

"I think people need to understand that the no-fly zone is not some type of silver bullet that is going to stop a very intense and, in some respect, sectarian conflict," Rhodes said, stressing though that Washington was not ruling out options, some strategic approaches would not work.

"We don't at this point believe that the U.S. has a national interest in pursuing a very intense, open-ended military engagement through a no-fly zone in Syria at this juncture."

U.S. ambassador to the U.N. Susan Rice took a similar tack when asked about a possible no-fly zone in New York.

"That option has some downsides and limitations that we are very well aware of and will factor into any decision," said Rice, who will next month take over as Obama's National Security Advisor at the White House.

Domestic opponents of the White House have demanded that Obama set up a no-fly zone in Syria to protect refugees and rebels from air strikes.

Republican Senator John McCain said Thursday that the United States should be able to set up a no-fly zone "fairly easily,"

"I'm talking about establishing a safe zone, it's neutralizing Bashar's air power, which is a decisive factor now in this conflict, as compared to doing nothing," McCain told CNN on Thursday.

Top White House officials on Friday refused to publicly provide a list of the kind of new aid Washington would provide in response to requests by Syria's opposition Supreme Military Council.

But the bolstered "military support" is understood to include some lethal materials that Washington has previously declined to throw into the conflict. Whether heavy weapons or just small arms will be involved is unclear.

Part of the reticence of top officials is apparently due to the fact that such military aid is classified and may be funneled to selected Syrian rebels forces in a covert mission by the Central Intelligence Agency.

"We do want to be responsive to the requests that have been made by the SMC and General Idris, consistent with our own national interests," said Rhodes, referring to rebel military leader Selim Idris.

State Department spokeswoman Jen Psaki rejected some reports in U.S. media that a no-fly zone had been decided upon, though said it remained in the options that Obama had at his disposal.

A day after his White House announced stringer U.S. aid to Syrian rebels after concluding Assad's forces had crossed a U.S. "red line" by using chemical weapons, Obama still had not addressed the policy change in public.

The decision came after prolonged agonizing among White House officials about how to deepen U.S. aid to Syrian rebels while at the same time trying to ensure America is not dragged into another war in the Middle East.

Obama could privately detail U.S. plans in a video conference session later on Friday with the leaders of Britain, France, Germany and Italy, and will tackle the issue at the G8 summit Monday and Tuesday in Northern Ireland.

Despite private indications on the scope of the assistance and leaks to the media on the likelihood that some arms will be involved, the true nature of the new U.S. military aid remained unclear.

"It seems to me that we are not yet clear precisely what the policy response is going to be -- greater support on a different scale, and with perhaps greater urgency of one kind or the other seems to be on the cards," said a Western diplomat.

"I think the specific answers of what and when and how have yet to be produced."

It's aout time Obama did something about tyranny and desires of democracy.

A least, hope has return within the FSA ranks. Right on time before the Aleppo mass slaughter.

The Arabs should take matter into their own hands and not rely on foreign countries - be it the US or Iran.

Yes, a coalition of gulf countries plus Egypt would crush them in hours.... But Israel would prevent their ally from falling.

"Hope has return within the FSA ranks".

LOL, what are you on? The FSA-Al Qaeda ranks are falling apart and their morale has collapsed. Qusayr was the death blow and they're not even close to recovering from it.

How can Egypt and the pathetic Gulf countries crush powers that have fought off Israel!?

Come on Obama......slam the hell out of Bashar and HA! This should be a breeze for USAF.....like a Sunday afternoon drill. lol!

This is obvious. It's no secret that they're secret allies, the only resistance is us. We resist the fake resistance and in Syria the only resisting people is the FSA and the locals.
Israel gives legitimacy to hezb Ebola by making it look indispensable, but it's a sham.
We're no longer blind and our destiny is in our hands. Not in tel aviv, Tehran, Damascus or even jeddah.

@FT: I have monitored your posts as well as others'. There are many intelligent posts and there are also many stupid posts. What amazes me about your posts is the fact that they are the most stupid ones while camouflaged as intelligent ones.
You have never failed deflecting the blame and disputing the obvious; (one of the worst traits).
You have never made a valid point in any one of your posts; as I have previously wrote, you’re totally bankrupt.
Read up and educate yourself about matters and focus your energy on the positive.
I can see right now what your reply is going to be; similar to your many pre-emptive postings.
Keep it coming; I'm sure you are entertaining to many others.

I always wondered, what Canadian city do you live in?

Actually the real loser will be Iran, this is starting to look life Afghanistan in the 80s, Iran will bleed men and a lot of cash (billion a month) , Russian are making money but also losing a lot of political capital. Hezbollah took the bait and it's slowly drowning in the quagmire. Can you imagine the status of Hezbollah a year from now? What the casualty figures would look like? Perhaps the Russians have even set up the trap for Hezbollah. This is gonna be long and bloody.

That's too bad, FSA-Al Qaeda and their Al Qaeda sympathizing February 14 brethren were getting ready to barbecue human hearts in celebration.

What cash is the US losing?? All paid for by the gulf, the real loser at the end of the day in this stalemate will be Iran and Hezbollah as they bleed men and a lot of money. Russia is not that crazy about Iran going nuclear either, Russia set up the trap for Hezbollah and pushed it into Syria. It is the Vietnam of Iran.

The US absolutely needs to impose a no fly zone over Turkey and Bahrain to help the peaceful, democratic revolutionaries overthrow their tyrannical terrorist regimes and restore democracy to their lands.

Long live freedom, and down with Al Qaeda and terrorism!

cityboy - If the Arab countries put their act together, Israel will be running to make peace. The problem has always been the inability of the Arabs to put their house in order which allows others (be it Iran or US) to control their destiny.

Rafeh, I might tend to agree with you if you were to stop equating Iran with the americans. The americans control almost every arab government. With regards to Iran, yes it does have geo-political interests in the arab countries, can you blame them, it was the Arabs that supported Saddams attack on Iran which led to an 8 year war. The Iranians want good relations with all its neighbors and the rest of the developing world, cant say the same about the americans.

Again, you need to smoke Da Kine, not Da Crack.

some of the options considered by the us to arm the rebels short of no fly zone:
1- provide rebels with unlimited amount of pocket mirrors to reflect the sun and blind the attacking syrian regime military aircraft pilots.
2- drop from the air thousands of playboy bunnies leaflets on syrian regime troops while attacking the rebels for distraction.
3- provide rebels with large mace spray cans for close combat situations.
4- equip rebels with heavy duty slingshots that can shoot arrows after providing them with necessary intensive training...