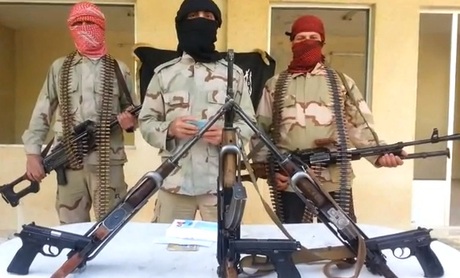 A videotape for a group claiming the killing of the four Lebanese men who died in Baalbeck's Wadi Rafeq region on Sunday was leaked to media outlets on Wednesday.

The group, Brigade of Jihadist Fighters on the Syrian-Lebanese Border, announced in their message that they are behind Sunday's incident.

However, security sources told LBCI television that the videotape is “fabricated and that it might have been disseminated to distract attention away from the real perpetrators.”

"Investigation is ongoing in Sunday's crime and some clues were revealed that could lead to tangible results soon,” LBCI said quoting the security sources.

The same source also noted that the names of several possible attackers were identified.

"Handing over the suspects to concerned authorities is a must to avoid the worsening of the situation.”

Several meetings took place in the Syrian border town of Arsal in the presence of the municipality's council, and other prominent figures in the village, and a released statement after the talks condemned Sunday's crime.

"We lift any political cover on all suspects proven to have played a role in the crime and we call on the security forces to pursue the investigation and try the perpetrators.”

Four people were killed on Sunday, including two members of the Jaafar clan, when their car came under gunfire in Arsal's barren mountains, state-run National News Agency reported.

The unidentified assailants shot dead "two members of the Jaafar family, an Amhaz family member and a Turk" in an ambush while they were smuggling fuel through the Qaa area, a security source told Agence France Presse, asking not to be named.

LBCI, however, said the four were killed in “Wadi Rafeq, a border area between al-Qaa's barren mountains and Ras Baalbek.”

Like the tape after the harriri assassination. I just wana know who exactly funds these things. Everything costs money, n there's ppl out there paying for this war.

The Lebanese people (non-Al Qaeda sympathizers) expect immediate justice. Anything less and it will be up to family members to take matters into their own hands and seek their own form of justice.