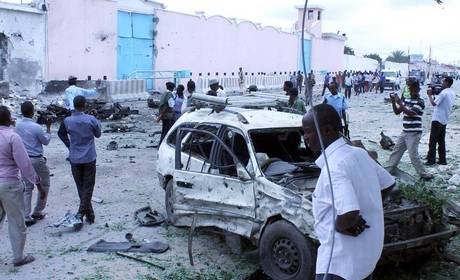 Somalia's leaders vowed Thursday that progress would continue despite fresh threats by Islamist Shebab insurgents, a day after they staged a deadly attack on the U.N. compound as a "warning" to the world body and "infidels".

Eleven people were killed when the seven-man team of suicide commandos from the al-Qaida-linked Shebab insurgents shot and blasted their way into the U.N. compound in Mogadishu Wednesday, before Somali and African Union forces battled their way inside to kill the gunmen.

U.N. chief Ban Ki-moon expressed outrage at the "despicable" attack which left eight people working for the world body dead, but said that the organisation would not end its work in Somalia.

In turn, the Shebab said they would not give up their attacks.

"We wanted to show the U.N. that they will have no safe haven," Shebab spokesman Ali Mohamed Rage said in a speech broadcast Thursday on the extremist Radio Andalus station.

"It was a warning for those infidels (non-believers) who hope to violate the rights of the Somalia people in future."

Somali President Hassan Sheikh Mohamud called the Shebab a "disgrace" to the country, warning that "violence and terror will not derail" progress made in the capital in the past year, a city where such bloody death tolls were once a daily occurrence.

"Over the past year, Somalia has turned a corner," he said in a statement late Wednesday. "We are now on a determined path of recovery and reconciliation."

One U.N. staff member was killed, who Kenya's foreign ministry confirmed was a Kenyan national, in a statement condemning the "cruel attack".

Mohamed Yusuf, head of the Medina hospital, the capital's main trauma center, said that 18 wounded people were being treated, four of them with serious injuries.

Mogadishu was reported to be calm on Thursday, with the areas around the bombed-out entrance of the now empty U.N. compound cordoned off.

The brazen daylight attack forced aid workers to evacuate temporarily back to the secure airport zone, the headquarter barracks of the 17,000 African Union force that is fighting the Shebab.

"It was a shocking attack... we never thought Al-Shebab could hit such a defended area," said local resident Ali Muktar, adding that he had seen several vehicles carrying foreign aid workers to the airport zone.

One local aid worker, who asked not to be named, said that several foreign aid workers had flown to Nairobi on Thursday morning.

The Shebab celebrated the attack Thursday, with Rage claiming it showed "no tanks or military arsenals will deter our mujahedeen from defending their religion".

President Mohamud warned Somalis they will "sadly be subject to this sort of mindless terrorism for some time", and appealed for support in helping to "deter and catch these cowardly criminals".

Ban telephoned Mohamud soon after the attack to offer his support, while international partners also said they too would not be put off.

Somalia's capital has been hit by a series of attacks including suicide and car bombings, mortar attacks and shootings, ever since the Shebab abandoned fixed positions in Mogadishu almost two years ago.

Since then, the AU force and Somali government troops have forced the Shebab from a series of key towns.

Their previous last major attack was in April, when a nine-man suicide commando unit blasted its way into Mogadishu's main court complex, killing 34 people. The attack on the U.N. compound used similar tactics.

While riven by infighting and hunted by U.S. drones, Shebab extremists remain powerful in rural areas as well as reportedly having infiltrated the security forces.