Gemayel: Hizbullah's Salvation Lies in its Return to Lebanon 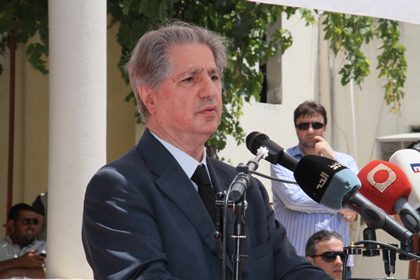 Phalange Party leader Amin Gemayel stressed on Sunday that resistance movements in Lebanon have always sought Lebanese interests, “but it is not known what Hizbullah seeks to gain from fighting in Syria,” reported Voice of Lebanon radio (100.5).

He told the radio: “Hizbullah's salvation lies in its return to the Lebanon.”

“The party's involvement in foreign conflicts will make it the first victim of its actions,” he warned.

“All of Lebanon's crises were caused by foreign developments,” he lamented.

Gemayel added however that had it not been for the country's “immunity”, it would not have been able “to remain on its feet.”

Hizbullah chief Sayyed Hassan Nasrallah acknowledged that members of the party are fighting alongside Syrian regime troops against rebel forces.

He justified the involvement by saying that the fighters are defending holy Shiite sites and combating American, Zionist, and takfiri agendas in Syria.

“but it is not known what Hizbullah seeks to gain from fighting in Syria,”... that's simple the Ayatollah told Nasrallah to prop-up their Axis partner Assad.

Nasriagah Is not a puppet or proxy of Iran! he and the whole gangs are the proxy of Khamenei and Sepah.
Don,t please mix Kamanehee with Iran and Iranian!

Those traditional politicians have to say something to please their members and to remind them they are around and can speak even nonsense. I have been hearing those names for the past 60 years, no change.

For the time being hizbullah will put all his weight into the Syrian Iranian axis. If this axis loses the battle in Syria hizbullah may look into a Lebanese option. However this is very unlikely as hizbullah ideology is built in the will yet al fakih. It will be more likely that berry will play a bigger role then.

And lebanons salvation lies in getting new leaders and disarming every militia regardless of religion or political side.

And lebanons salvation lies in getting new leaders and disarming every militia regardless of religion or political side.

I was going to say the same...

who cares about hezb ebola's salvation? we want the salvation of Lebanon... and it cannot happen with their huge arsenal point at anyone who disagrees with them. bye bye hezbollah. One way ticket to Najaf where they can go on with their ethnic cleansing against Sunni. Stay away from the holy land.... because you're most unholy.