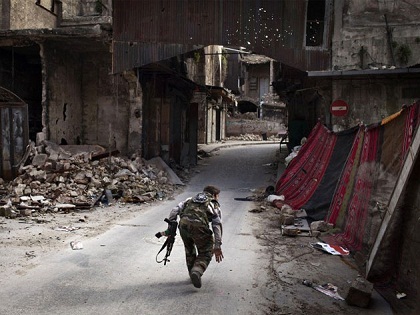 Iran has denounced a decision by Western and Arab countries to send weapons to Syrian rebels fighting the regime of President Bashar Assad, the official IRNA news agency reported Sunday.

"Those who support sending weapons to Syria are responsible for the massacre of innocents and for the insecurity in the region," the agency cited Deputy Foreign Minister Hossein Amir Abdollahian as saying.

At a conference in Doha on Saturday, the main foreign backers of Syrian rebels battling Assad's troops said they would provide "urgently all the necessary materiel and equipment" to the opposition.

A final communique from the meeting, attended by 11 countries including the United States, Britain and France, said that the equipment would be channeled through the high council of the Free Syrian Army.

Ministers from the 11 countries agreed to provide the support to the rebels to "change the balance of power on the ground".

They also demanded that Iran and Lebanon's Hizbullah party stop supporting Assad's regime, saying that their actions "threaten the unity of Syria" and could "inflame the whole region".

Abdollahian lashed out at the U.S. for its role in the Doha conference.

"Instead of sending weapons to Syria, Washington should support an end to violence and national dialogue so Syrians can decide their own future," he said.

He called on Washington to "stop supporting terrorism, the murder of people and the destruction of infrastructure in Syria".

On Saturday, Iran's Foreign Minister Ali Akbar Salehi said Iran "will never allow -- as it has shown until now -- that a political solution be imposed on the Syrian people from outside," media reported.

Salehi also lashed out at the decision to send weapons to Syria, adding: "I am amazed that the West, which speaks of human rights, is sending weapons to cannibal terrorists".

He was referring to a gruesome video that emerged on the Internet last month, apparently showing a Syrian rebel fighter cutting out the heart of a regime soldier and eating it.

Iran is Syria's main regional ally, and regularly denounces the aid that western and Arab countries and Turkey have given Syrian rebels.

It is funny how they can no so unilateral those Iranian. It is ok for them to send arms and soldiers but not for others.

I know racists in Lebanon are sad that young Hariri went to see the new President of Iran urging contacts outside of government.
But the real bad news here is, or at least I suspect it is, that Qataris are looking at their "ruling family" and getting ready to say, "These people are a liability to Qatar."