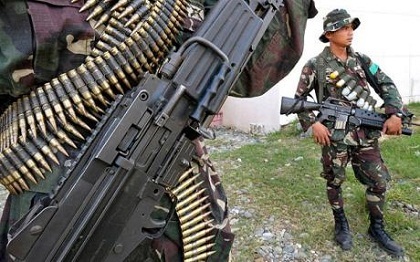 Two Philippine soldiers were killed in a clash with communist rebels waging one of Asia's longest running insurgencies, the military said Sunday.

The troops were on a routine patrol when they encountered the New People's Army (NPA) fighters in the town of Esperanza on the southern island of Mindanao on Saturday, army spokesman Lieutenant Colonel Leo Bongosia said.

Two soldiers were killed, while the rebels managed to escape following the clash -- the latest outbreak of hostilities after peace talks broke down earlier this year.

Last week, NPA rebels attacked a tree plantation in the same town and killed five workers after the owner refused to give in to alleged extortion attempts.

Another NPA unit elsewhere in Mindanao abducted five unarmed soldiers in civilian clothes as they bought supplies in the market.

The 4,000-strong NPA is the armed wing of the Communist Party of the Philippines, which has been waging a 44-year Maoist insurgency that has claimed at least 30,000 lives.

President Benigno Aquino had hoped to reach a peace deal with the communists by the time his six-year term ends in 2016.

The talks however collapsed in April after the government rejected rebel demands to free dozens of detained comrades.

The insurgents have since stepped up their attacks, with 13 soldiers and police commandos killed since last month.