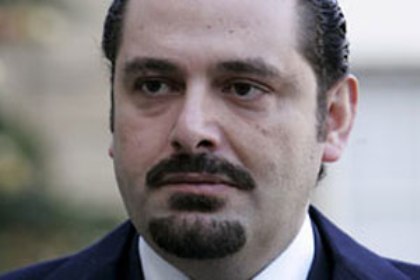 Former Prime Minister Saad Hariri warned on Sunday against any attempt to drag the southern city of Sidon into a “confrontation with the state,” holding Hizbullah responsible for “provoking the city’s residents.”

“We warn against attempts to drag Sidon into a confrontation with the state and the army ,” Hariri said in a statement he released commenting on the latest clashes between the military institution and supporters of Salafist cleric Sheikh Ahmed al-Asir.

Hariri held Hizbullah responsible for Sidon’s clashes “through provoking the citizens in the city and spreading security outposts in the neighborhoods.”

“Hizbullah's sin should not be an excuse to break the law or to use weapons against the Army or any other legitimate security forces,” he noted.

“We urge the citizens not to be dragged into any negative reactions that would provide cover for the acts committed by Hizbullah and give those harmed by the extension of State authority the chance to achieve their political and security goals.”

Hariri considered that preserving stability and coexistence in the city is “the responsibility of all,” warning against jeopardizing them.

“We call for concerted efforts in order to protect stability and coexistence, which will only be achieved through the State and its institutions in particular through the army,” Hariri stressed.

He continued: “And we rely on the wisdom of the military institution’s command to take measures that protect the city and avoid falling into the traps of the instigators and the calls launched by those who hide behind Hizullah’s weapons awaiting opportunities -in the name of the defense of these arms- to undermine the prestige of the State and of all forces calling for an end to the policies of hegemony.”

Hariri expressed his deepest condolences to the families of the victims “who pay every day exorbitant prices due to the proliferation of illegal weapons and the rule of the logic of intimidating the state.”

“The army’s martyrs are the martyrs of the entire nation and their loss is a loss for every Lebanese who believes in the state and its institutions.”

Ten army troops were martyred and several 35 were wounded Sunday in a clash with supporters of al-Asir in the Sidon suburb of Abra, the Army Command said in a statement.

LBCI television said the clash in Sidon allegedly erupted over the army's arrest of two individuals linked to the Bilal bin Rabah Mosque.

Hariri you should condemn in the harshest words Asir and his gang.

Did Nosrallah condemn the brutal assassination of the pacifist Shia demonstrator in front of the Iranian embassy? And the army was watching.....

Nassrallah said the boy was "Mazloum"

“Hizbullah's sin should not be an excuse to break the law or to use weapons against the Army or any other legitimate security forces,” he noted.

Sectarian, what ever happened to those who killed sameer hana? Not tool mention the scores of people who were assassinated

At least they don't fire rockets at the army and kill Lebanese soldiers like the filthy sunni dogs in Saida. You stupid savages and that goat-faced piece of shit Assir are the ones who escalated the situation. Soon the terrorists will be killed and we will drag Assir by his beard through Saida's streets. We should cleanse Lebanon of you fanatics.

FT. HA never attacks the army. It is very "classy" in its behaviour.
Only there is a elephant sitting in the room that you are not mentionning. The army has CLEAR instructions to NEVER attack HA. Even on 7 may, army didnt defend lebanese against HA's proxies. Why would HA attack an institution which will not touch it?

The yemeni/syrian/palestinian/lebanese thugs attacking the army should be caught and judged. 100% agree with you. And this is priority 1.

But disarming HA is priority 2. There is no reason to keep weapons with a milicia in lebanon, even a milicia that does not attack the army.

I agree. Hariri and especially geagea's attitude towards HA is negative and destructive. HA needs to be engaged and talked to, boycotting it will lead nowhere.
HA is like a rogue teenager that needs talk and reassurance and taming. Hariri and geagea are telling this rogue teenager to go live outside the house. Wont work.
But M14's crime is to not be wise enough in catering HA. It is a smaller crime than HA's. HA's crime is to arrogantly think it can have monopoly of weapons and make decisions on war and peace.
Geagea and Hariri will loose. And HA will loose too. It is lebanon who will win. Mark my words.

Thank you, we should not turn this about sects. We need to stand together as Lebanese, to create a united and peaceful Lebanon. A Lebanon worth living in. One that other countries would look up to and be jealous of. I've had enough of traitors and extremists from all sects who try to destroy this nation. You either stand by this nation or you leave. If you are civilized and lawful then you can stay, no matter your religion.

Disarming HA is the solution for all Lebanon's problem.

Disarming HA and let other thugs like Asir get armed, that is?

Let him who is without sin cast the first stone!

The cover of Hariri the Al Qaeda terrorist has been lifted.

Disarming HA is the solution for all Lebanon's problem.. it will definitely help disarming .
Palestinians and syrian puppets like assir.
close our borders with syria. Long live president Suleiman

Abraham, agree with you . you seem to be the only reasonable commentator on this page among all these idiots from both 8 &14 sides

Good to see the KSA puppet come up for air from under his masters 3abiyi. Not that anything he ever says has any truth or substance.

Hariri misses concentration and charisma ... unfortunately the apple do fall far from the tree sometimes

As part of the HA inner circle , we have officially declared war on the Sunni "Fanatics " for attacking our LAF .