Al-Rahi Lashes out at 'Executioners,' Says Attack on Institutions is 'High Treason' 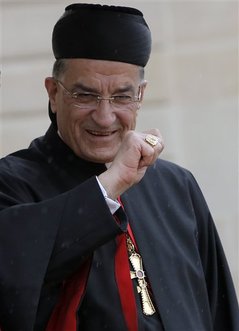 Maronite Patriarch Beshara al-Rahi described on Monday as “executioners” all parties that use illegitimate arms against the Lebanese people, saying the country was paying the price of their actions.

“When we use illegitimate arms against the people of our nation we all become executioners,” al-Rahi said during a ceremony in Adma, north of Beirut.

“There is only one victim that is Lebanon,” he said. “They are all executioners!” he added about the March 8 and 14 alliances whom he blamed for the deteriorating security situation in Lebanon.

He said the attack on the army in the southern city of Sidon is an assault on the state, the dignity of the people and the nation's self-esteem.

He also described the attack on state institutions as “a crime against the people and high treason.”

At least 12 soldiers have been killed in less than 24 hours of clashes with supporters of Salafist cleric Sheikh Ahmed al-Asir in Sidon.

The fighting intensified on Monday, a day after the violence began, when al-Asir's supporters opened fire on an army checkpoint in Abra where the cleric's Bilal Bin Rabah mosque lies.

Al-Rahi condemned “all those covering up for the crimes, including politicians,” saying they were as guilty as those committing the crimes.

He urged the judiciary to arrest Sidon's gunmen and give them the ultimate punishment “although some politicians, who are professionals in covering up for crimes, might pressure it.”

The patriarch said Sidon's fighting and similar cases in different regions in addition to the involvement in Syria's war came despite the Baabda declaration in which different parties had pledged to distance Lebanon from the region's crises.

“They are the results of the persistence to paralyze state institutions and dismantle them,” he said.

God bless Al Rahi for saying it as it is and condemning the filthy terrorism of Assir.

Assad goat, hes been an assad goat since day one

Oh, why don't you go ring some bells somewhere and stick to making the handsomest of living out offering nothing of value to humanity whatsoever.

Boutros, wake up, grow up and save yourself some idiotic comments.

He said the attack on the army in the southern city of Sidon is an assault on the state, the dignity of the people and the nation's self-esteem.

Hahahahaha a longer one, he could perhaps join cardinal Ratzinger wherever he is....and copy him!

From a March 14 supporter: two wrongs don't make a right. The army should arrest or kill all those who cowardly attacked them without showing mercy. It is bad enough to have Hezbollastan. We don't need any more like this. We love the army, we love our president, we love Lebanon.

The patriarch is right about his statements. Everyone should understand that we can only rely on the Lebanese army – nobody else. I bet every hater that if it were HA attacking the army, the patriarch, I and majority of Christians would have bashed HA the same way we are doing to Assir. Unfortunately to haters HA will NOT go unbalanced and start striking left and right especially not against the Lebanese army. Haters should give us a break and accept that a country will NOT function if Assir, Rifai and Islamists/fundamentalists remain alive. The army should get rid of them – no mercy enough said.

HA would not react violently to the Lebanese army if it came under direct attack from it.

from all the above comments I can see the civil war mentality is there.
let the games begin and in a few years of some 150000 more deaths and destruction of our country, try to remember this day and what you all are saying.
in a civil war nobody wins: we all loose.

is this a new fatwa by the religious man? Has it occurred to him and others it is not they who define treason....LOL.